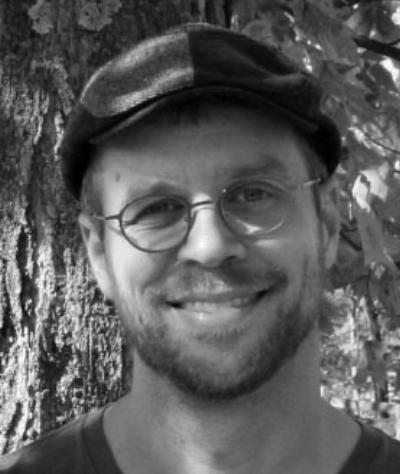 Cody F. Miller is a mixed media artist who resides in Columbus, Ohio. He works with magazine collage, acrylic paint, and charcoal. The patterns and odd configurations he stumbles upon are an integral part of conveying the endless layers of humanity.

An old 1885 second grade reader or letters from a father to his son during World War II are collected and stored for the next piece.

The Scriptures, the writings of Thomas Merton and the music of Tom Waits are all important influences in Cody’s work. They are ingredients in creating, as Ben Myers says, a “horizon of this dark world where we glimpse the startling first glow of dawn, the surprising appearance of grace ‘out of the depths’ (Psalm 130:1).” Metaphors, analogies, and other related devices are used to convey beauty that often comes disguised as a loss, failure, or unwelcome change.

Miller’s work has been shown in numerous exhibits, such as “Havana/ConnectArt” in Matanzas, Cuba, “The Best of 2019” at the Ohio Craft Museum and the Springfield Museum, Solo Exhibition, “Sojourners,” at the Hayley Gallery in New Albany, Ohio, “In Close Proximity” at the Cultural Arts Center, “From the Familiar to the Unfamiliar” at the Ohio Art League, “Glory Be” at the Johnson Humrickhouse Museum and “Annual Acquisitions” at the Viewpoint Gallery in Schenectady, New York. He is represented by the Hudson Gallery in Sylvania, Ohio.

Miller received an Ohio Arts Council Individual Excellence Award in 2002 and 2018, the Collector’s Award for Excellence at the Ohio Craft Museum’s “The Best of 2019,” Juror’s Choice 2D Award at the 2018 Columbus Arts Festival, Best of Show in 2001 and 2012 at the Westerville Arts Festival.
Cody was the art instructor at United Cerebral Palsy for 16 years and is currently a resident artist at the Goodwill Art Studio.