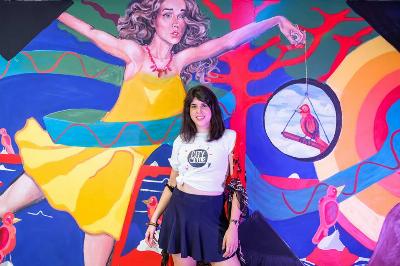 I was born in Honduras in 1991, Tegucigalpa Honduras. I lived in Mexico for almost 10 formative years and recently moved back to Tegucigalpa.

I started painting and drawing at a very early age. I come from an artistic background. My uncle was a painter brother of my grandmother and my dad is a painter, sculptor, architect & automotive designer. My sister and cousin are illustrators. I feel lucky to be part of an artist family whereat is not strange for my dad, sister and I to sit and draw together, still.

When I was a child, my sister and I created stories in small comic books, inventing our own characters. While growing up, my father taught us how to use acrylic, oil paints and water-colors. I painted my first mural within the age of 13. I created my first professional painting at age 15. Since then I have been drawing,

I studied Graphic Design in Mexico city. Later on I moved to USA to study one year of illustration. One of my biggest life achievements was being accepted to the prestigious Savannah College of Art & Design (SCAD) in the United States. Receiving a judge scholarship from. While I couldn’t finish my studies I only stayed for a year, I did not stop pursuit of my career as artist. I worked for two years as an illustrator for appbooks with the company named Bulbulapps. At the same time, I worked as an illustrator for children's books. This work led to my illustrating for a film produced by the children’s books author. In 2015 and 2016, I taught art classes for children aged 9 to 14, sold portrait paintings and showcased my work at exhibitions in Bistro, La enramada restaurants and yautepec 98 house gallery in Mexico City.

Years later I moved back to Honduras were I experimented life It was the presidential elections and there was disagreement. The people angry got power in the streets we had a curfew. There were political problems so I moved twice to different cities. In San Pedro Sula, the second capital of Honduras, I made my first mural. From there I moved to an island called Roatán located in Honduras. Where I started doing murals, paintings, live art shows (painting while the audience sees you painting on stage). I was painting along with a music group called The scallywagz with an artist named Brion James a famous artist in Honduras and known in some parts of the world. I did murals and paintings for Bars, restaurants, dive shops, The marine park and public schools.

In 2019 I moved to the United States where I did my first mural in Washington DC for Rebuilding together. My first exhibition in Washington DC RAW artist . I Participated in a Chalk Fest in Reston VA. In 2020 I went to Mexico, I made a mural with other artists and exhibited at Interarte in Spain. I’m talented and hard worker I want an opportunity to exhibit my art in this gallery