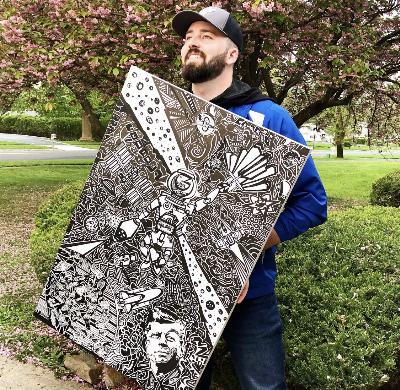 Quill was born in Brooklyn, NY in 1994 to a Irish family of nine. His family moved to Manalapan, NJ where he learned to doodle in class. Quill managed to get by despite his habitual penmanship & went on to study at Rutgers New Brunswick, receiving a B.S. in Journalism & Media Studies, where he took classes at Mason Gross School of Arts.

Quill was first commissioned to paint a large mural for Rutgers 250th Commencement, but after he wouldn’t paint again until 2018 when a supernatural string of dreams inspired him to pick up the paint brush again. His first ever commission after this awakening was for Grammy-Award winning artist, Charlie Puth.

During Quill's hiatus from art in 2016, he switched his focus to music, where he was selected with his sister to perform on stage with Grammy-Award winner Kelly Clarkson during her Piece-by-Piece tour.

Quill's mission is to spread Peace, Love & Positivity to all people through his art. You can find an image of Quill as well as his motto in every piece he creates.

Quill is just me 🙂
But I'll add some personal notes...

My real name is Brian Nealon, but I use the moniker "Quill" after some really crazy dreams I had. They included symbols of Christ I never saw before, some premonitions of things that came true, etc. It was strange, but now I include some of the elements from my 'week of dreams' into all of my pieces as well.

My 'Peace, love & positivity' motto comes from moments of my past & the person I strive to be. When I was younger I only made art for other people I felt needed it. I never much liked to paint or draw but I always felt the need to draw a picture of Jesus or angels or anything really for people that I saw in pain. I always saw their eyes light up which fueled my art production. Years later as ran into some of those people again, they always said thank you & how much it brought them peace. I wasted so many years because I hated to make art. Those crazy dreams I mentioned showed me a future of what my art can do for the world...I paint as "Quill" so that I can inspire, and spread 'Peace Love & Positivity.' Since the dreams in 2018, I've felt fulfilled whenever I paint, knowing it's impacting people. That smile people give after seeing a painting I made for them is priceless - I now live for that.