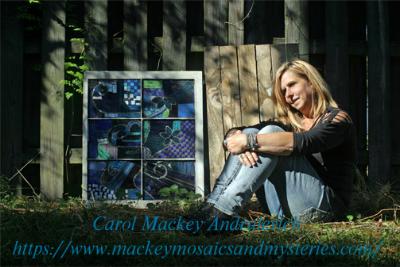 Creating visual imagery that bypasses words and touches the life of the one who is interacting with her work, is the desire of Carol Mackey Andrulevich. The intention behind her art is to offer hope and encouragement, but much of her art goes much deeper. She attempts to portray the spiritual realm, believing we are multidimensional beings composed of mind, body and spirit.

Carol was born and lived in Louisville, Kentucky most of her life. She has vivid memories of herself as a child in Kindergarten, watching her favorite show on TV. In the show, the husband of the lead character was an advertising executive. She associated this job with the arts and declared to herself that this was her dream job. Carol’s parents had other ideas, pushing her to pursue anything, but the arts.

She attended University with a partial tennis scholarship and majored in “socializing.” Really, her major was Psychology, which she quickly learned after graduating, did not provide a lucrative income. She worked for several years in the field of Social Work, helping the disabled. Having a call for adventure, she married late in life. Her adventure lust took her to live in the Rocky Mountains for short stints and at the age of 30 she became pregnant, but did not have a husband. She returned to her parents’ home from the Rocky Mountains, with her head between her knees. During her pregnancy, she announced to her disappointed parents that she planned to attend school once again and study Graphic Design. Computer technology was somewhat new at this point in her life. In 1994, she gave birth to her son and realized that it was time to go back to work. She never obtained that degree in Graphic Design, but she found a love for teaching students all aspects of the computer, dabbling in teaching computer assisted design, 3D animation and video editing. Discovering her gift for teaching, she went on to get her Masters Degree in education and taught middle school for many years, finishing her years of teaching as a college professor.

In her late 40’s Carol met her soul mate and they married. He was an engineer by day and an accomplished worship musician on the weekends. During their early years of marriage, while living in New York, Carol would tell him that she wished she could be an artist. She even prayed that God would give her the gift of art, so that others would find answers to life’s struggles in a message to their heart through her visual art. At this point, she didn’t even know if she could draw a square, but she had a strong passion. One Christmas, her son and her husband bought her paper, paints and an art book. They instructed her to paint every day. She was bound to get better! Those early days of trying to paint were not pretty, but she has painted every day since and her artistic talent has blossomed.

Carol found a love for mixed media techniques. She is mostly self-taught, but has had several mentors along her path of discovery. Finding new methods through researching extensively and experimenting with different materials, such as holographic papers, alcohol inks, glass, resin, gold leaf and colored foils is how she spends her days as a retired teacher in Panama City, Fl. She loves the tactile sensation of placing acrylic paint on the canvas and by using objects that shimmer and shine, enabling her to portray her spiritual vision.

What is the best way for people to find out more or to contact you?
https://www.instagram.com/carolmackeyandrulevich/