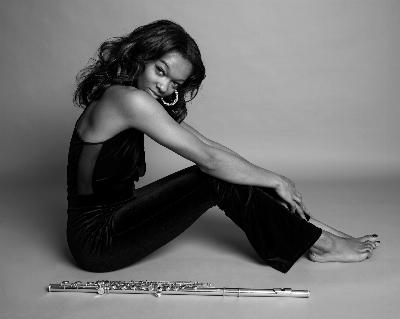 Coreisa Janelle Lee (BM,MM) has 17 years of Classical and Jazz flute education. Ms.Lee has made an appearance on both the Jimmy Kimmel show and the Meredith Vieira show - where she was awarded a new professional Powell flute by Meredith Vieira herself. Internationally known, Coreisa has performed in over 300 venues across the world, including: touring to Russia as a featured soloist, touring to Spain as principal Flutist of the New York Youth Symphony, performing multiple times at Carnegie Hall, a solo performance at the Richard Rodgers Amphitheater, and multiple private shows with cast from Broadway’s “Hamilton” and “The Great Comet.” She has had the chance to perform for the United Nations 69th anniversary alongside pianist, Lang Lang, and Pop singer, Sting. As a recent graduate recipient of a Masters degree, in the fall, Ms. Lee will go on to receive her PhD as a provost fellow at West Virginia University. Contributing to her success, she’s had the pleasure of working with: Misty Copland, Meredith Vieira, Ian Clarke, Greg Patillo, Anthony McGill, Reggie Parker and many more. Her past teachers include: Dr. Conor Nelson (MM, BGSU), Linda Chesis (BM, MSM), Kim Scott Strickland and Dr. Frank Adams. Ms. Lee is a recipient of the Pablo Casals award, awarded for extreme musical accomplishment and human endeavor.

Flute Concerto Performance: A Musical Journey Depicting Strength and Courage in the midst of Battle