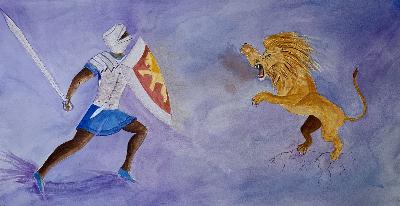 Cris Miles, a retired union painter and sign maker is an artist and crafts person who lives in Minnesota, Wisconsin and Texas. Graduated from the University of Wisconsin at Green Bay with a B.A. in Creative Communication and a minor in Visual Arts.

Grandma Moses was the first artist to influence her. She remembers the printed fabric that graced her mother's drapery and studying the depiction of snowy country scenes in the folk art style. She was hooked and consider herself an artist at age 5, though she may have been alone in that early assessment. Like Grandma Moses, she waited until her children were grown before she felt she had the time to devote to her real life's work.

As an artist, Cris likes to explore various mediums and expressions with an emphasis on the movement and the feeling that art evokes. Working in series helps her to develop ideas, skills and continuity of work.

She has only recently begun to enter juried shows and artist venues. Currently she is completing a series on “Creation” that is to be included in the August issue of Edge of Faith magazine. “Day Seven” was featured on the cover of the April edition of the magazine.