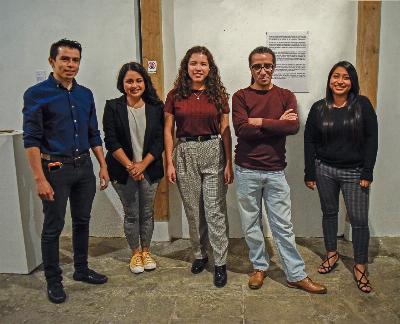 In his work Daniel explores the visual elements in a minimalistic way and other times through realistic drawings, he proposes visual experiences through drawing, painting and sculpture. Interested on social-human spiritual nature.

Xperimenta is a current space for dialogue, studying, analysis and creation of visual contemporary arts. A program focused on students, emergent artists with or without career, who pursue building, vinculate with creators, development of critical thinking and generate strategies for production and artistic creation.

Since its creation on 2016 has developed artists through specialized workshops focusing them on the arts of today in all disciplines of creation.
From this platform it has been made exhibitions as a result of the individual and collective investigations of the ones who has joined to the project.

The actual group integrated by: Daniel Anleu, who started at 2016, Andrea Letona, Crystel Conde and Sarai Xajil who joined on 2018, Carlos Lobos and Ian Vásquez on 2020, they have been developing several projects including the exhibition “Vacío” (Void) 2019. On this year two more projects join, one about a multidisciplinary exhibition and the other one a video interpreting the biblical passage in “Ephesians 6:10-20”, The Armor of God.

Crystel Conde Biography:
She is a Visual Artist with a specialization in painting from the School of Arts, at the University of San Carlos de Guatemala, she is also a Technical Draftsman with a diploma in Art and Design from the Center for Tuscany Creative Education in Guatemala, Member of the X-PERIMENTA group of Contemporary Art. She has different collective pictorial exhibitions and has created murals in the interior of Guatemala in the project of art and touris “A Country with More Color”, INGUAT. She is currently a professor in painting and drawing for children in the Fidelis ad artem association.
Her visual work is oriented to observation and investigation, employing the use of pictorial techniques such as acrylic, oil, watercolor, etc. With a warm color palette, it makes use of experimentation with materials from its surroundings and nature. His proposal is abstract and sometimes figurative, with a Guatemalan theme, even themes of introspection, creating sensory stimuli for the viewer that allows him to freely imagine, identify and interpret. www.facebook.com/crysmancobarte

Saraí Xajil Biography:
She is a Guatemalan visual artist and graphic designer since 2012. She entered the Superior School of Art (ESA) University San Carlos de Guatemala in 2015 with a degree in Visual Arts. Her route begins on the SHO exhibition en La Casa Roja, located in zone one of Guatemala City, presenting her paint Zipper. The same year with a group exhibition with her paint Sueño de una Señora. Next year she participated in the mosaic mural done at the Escuela de Artes Plasticas in Guatemala. In that same year participate an exhibition held in the central park of Guatemala City for the day of women. In 2018 he performs the Supervised Professional Exercise doing art workshops for children and teenagers. In November 2018 she joined Xperimenta with whom she held the EMPTY exhibition at the Festival of the Historic Center in August 2019. Currently she focuses on making contemporary conceptual art and works as a graphic designer. https://www.facebook.com/xarajil

In his beginnings he studied plastic art in Guatemala City, very soon he discovered abstract painting, the medium he explored and with which he began his first works. In 1991, he made his first personal exhibition with gestural / abstract drawings in pastel oil, in 1992. He will obtain the 1st place in painting at the Paiz Art Biennial, (Guatemala) in the general free category, in the following years he will participate in various exhibitions in national and international galleries and museums connoting Guatemalan Contemporary Art, University of Maine USA 1991, International Festival of Cagnes Sur Mer 1993, Salón de la Plástica Mexicana 2000. The themes will be series: Of creation and war as stories of the walls and The four elements.
Between the transition of the century, 1996 to 2000 will include digital media, installation, performance, intervention of public space, object art, collaborative creation between different media; among others.
During those following years, his production will be with different languages, painting will be somewhat minimalist or object art, he will exhibit in galleries, museums and various works will be carried out in public spaces, intervening or installing, the themes and investigations will be varied from the Blood series ( Painting), Traces of violence (intervention in public space / performance, 2006; collaborative), No + walls (installation / action 2007), Guatepiñata (installation in public space 2008), Inside/Outside (Art book, graphic box, 2010 Spain), Mural: Stardust, (object art, Boadilla de Rio Seco Castilla Spain, 2014), Xdad: (performance / mural 2016) Series: Conflict (object art, installation, other media), Series: Geometric (photography of B / W architecture exhibited in Washington, USA), Series: Popgt (digital photography colorized with software) among others.
His work has been exhibited in Guatemala and internationally in countries such as Costa Rica, France, Spain, El Salvador, The United States of America, Honduras, Italy, Mexico, Paraguay.
Collectively, he has participated in more than two hundred samples in Guatemala and abroad.
As a teacher, she taught for ten years at ENAP, at the Universidad Da Vincie in Guatemala, also giving specialized workshops at universities, entities and private groups.
The last ten years he has directed the exhibition: I love you, I hate you, without you I cannot live; presentations of experimental contemporary art where artists from all means of creation participate, likewise Xperimenta (experimental contemporary art workshop 2016 to date).
Currently, her research continues on the problem of the Conflict from the political / social-human / spiritual side.
www.instagram.com/alejandronoriegagt/