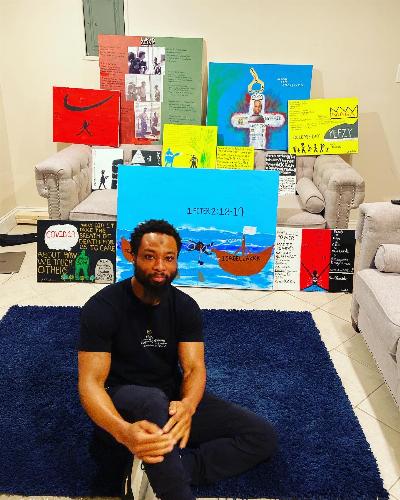 Halim A. Flowers is an artist, a writer, a designer, and an activist committed to criminal justice reform.

Halim was arrested at the age of 16 and sentenced as an adult to two life sentences in the District of Columbia. His experiences as a child in the adult prison system were filmed in the Emmy award-winning documentary “Thug Life In DC”. In 2005, he started his own publishing company SATO Communications, through which he published 11 books.

On March 21, 2019, Halim was released from prison after serving 22 years. Halim has used his voice and art to advocate for change in the documentary “Kim Kardashian: The Justice Project”, and speaking around the country as an Ambassador for the Represent Justice prison reform coalition.

In 2019, Halim was awarded the Halcyon Arts Lab and Echoing Green fellowship awards. His current artistic focus is in his visual arts PhotoPoetry practice. In 2020, he was awarded the Eaton DC Hotel Artist-In-Residency.