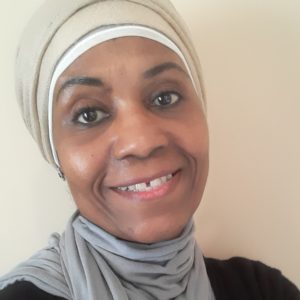 Jemma L. St. Lawrence-Martin (nee St. Lawrence), also known as Fatima Johara-Noor St. Lawrence or simply “Johara”, is an artist living in Charlotte, NC, since April 2017, and who has lived in the New York metropolitan area for many decades. Born on October 3rd, 1959, she migrated with her large family to New York City in 1973 at 13 years old, from the twin Caribbean Islands of The Republic of Trinidad and Tobago. She completed high school as a resident of Washington Heights, also known as “Spanish Harlem”, at George Washington HS, in January 1976, and immediately commenced undergraduate studies at the age of 16, at City College of New York (CCNY), CUNY, spring '76. After exploring a Math major and then Architecture, she settled on Art as this was one of her strengths and her passion. She attained a BA in Art with an Illustration concentration and a minor in Humanities, in February 1982, but is listed with the CCNY Class of 1980, her official graduation year. She had an interest in Black Studies and continued taking courses with the Black Studies department at CCNY after graduating through 1984, thereby expanding her knowledge, the context for the world of art, Black culture and history and exploring topics in Black Studies and Caribbean Studies, colonialism, civil rights and the Harlem neighborhood environment where she spent so much time during undergraduate studies. Jemma’s influences in art began from the beginning of her life in her formative years, as she lived in, experienced and participated in a dynamic culture of her home country. Experiencing the world renowned Trinidad & Tobago Carnivals and the many cultural and religious festivals the people of Trinidad and Tobago celebrated year-round, growing up was like a crash course in live performance arts constantly. Living in her early years in the town of St. Joseph, Trinidad (originally named San Jose de Oruna, the country's first Capital) in a country that is very diverse ethnically, racially, and culturally, and living amongst a population being predominantly of African and East Indian descent with Asian, European, Middle-Eastern and Indigenous mixes, while also living in an amazing bio-diverse tropical environment, these earthly experiences left an indelible mark in Jemma’s life and psyche that would eventually allow her to express uniquely through her art. She was also well aware of historic events like the Civil Rights movement, the Black Power Movement, the important figures of the time such as Martin Luther King, Malcolm X and who could forget, Stokely Carmichael the propulgator of "Black Power" who himself was a Trinidadian and a man to admire as a young person becoming self-aware. Then, living in the incredibly dynamic New York City environment in the 70s and 80s surrounded by incredible art and architecture everywhere with influences from all over the world, and having studied in a traditional art program at City College of New York, while having the Black-American and Caribbean-American Experience in the so-called “post-civil rights” era from the Bronx to Harlem to Brooklyn, allowed her to absorb incredible amounts of visual, mental, emotional, physical and spiritual references that could be expressed through her art as the realization of all of her experiences has culminated into the unique individual and artist she has become. Jemma was also an athlete and had a strong interest in Fashion during her college years. Over the decades from the 80s to 2010s, Jemma has been a part-time and seasonal artist, who created and designed costumes--focusing on carnival costumes, graphic arts and fine art. She has also assisted in curating art exhibits in the professional higher education setting at a CUNY College in Brookly, NY, and led the curation of an exhibit there Summer of 2011, mentored young artistic students, and worked in her own art consulting agency in New York and in Charlotte, NC through her company, St. Lawrence & Martin September 2014 to March 2020. Jemma has done this while holding down positions of wife, mother/working mother and single-parent of five children. She presently creates abstract works in acrylic and oil and also graphite and colored pencil drawings. She plans on working in both abstract and realism styles, exploring photography, 3-D and sculptural works, minimalism, and adding calligraphic and symbolism to future artworks. She is still working as a part-time artist in 2022 but hopes to transition to be a full-time artist by 2023, to be vocal about environmental, religious and spiritual subject matter, and display her activism voice in matters pertaining to women’s health and women’s progress in society. Eventually Jemma aspires to become an Influencer in the visual arts world.

Rushing Through in God's Earth