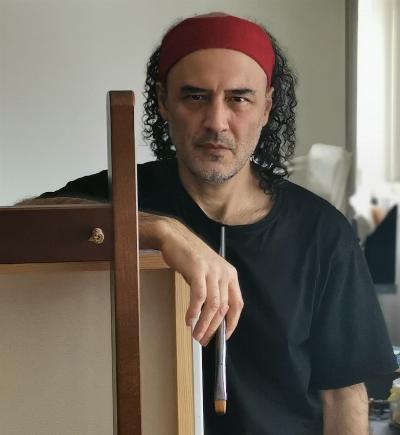 Visiting this planet since 26th November 1964, he started his journey in Syria, worked as a graphic designer, illustrator, interior designer, and set designer for theatre and film after his time at the Damascus Art Academy. In 1998, he moved to Qatar as an illustrator to create digital drawings for a well-known television station. In 2014, he decided to move to Toronto, Canada, where he now lives and works fully dedicated to his artistic career.

"Do not go where the path may lead, go instead where there is no path and leave a trail."Ralph Waldo Emerson.

Years ago, while I was teaching a children's art class I inspired by a student who tried to depict the smell of fried potatoes in her picture. Since then, I have tried to portray what remains hidden to the human eye: sounds, smells, tastes, and feelings. The human being only completes my works when he looks at them and thus becomes a part of the art.