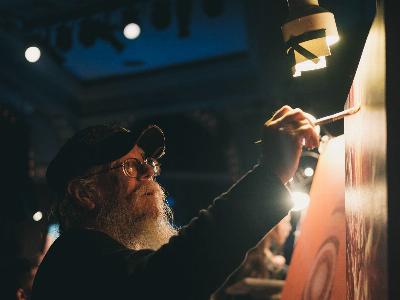 Mark Henson B.1952
Mark was born and raised in Northern California, and attended University there, receiving a degree in studio art in 1973. He has been a professional artist ever since, working with paint, metal, wood and computers. and now operates Sacred Light Studio from his home out in the country north of San Francisco, and maintains a small artist's retreat in Costa Rica. California native Mark Henson has been working as a professional artist all his life. He graduated from the University of California, Davis in 1973. While primarily an oil painter Mark also enjoys working in a variety of other mediums,
such as digital graphic arts, wood and metal. Mark exhibits his work internationally, and his imagery can be seen in many places on the internet. He has co-founded several gallery ventures, traveled extensively in Asia and elsewhere, and continues in his efforts to build a global network of artists working together. Mark was one of the first artists to "live paint" at gatherings and music festivals. When not at work in the studio, he will occasionally paint before the public, and also gives lectures and workshops worldwide. Mark presently makes his home in rural Northern California.

I like to make art that is idea-driven, art that expresses a theme or philosophy, perhaps it could be called allegorical art in the sense that I am telling you a story with the image. Besides providing visual stimulation, my intention is for the images to evoke powerful thoughts, woven with sensitive emotions. We live in challenging times, and in my art I touch upon themes of spirituality, ecology, politics, and our erotic inclinations in a way that is both powerful and empathetic. Art should never flinch from showing us all aspects of reality, and always be true to itself.