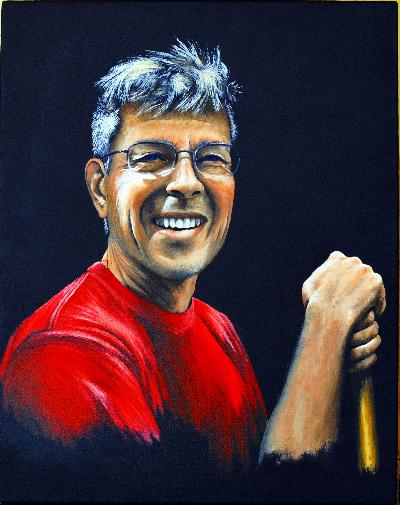 For as long as I can remember, I’ve wanted to view the human experience through the biggest possible lens. My desire is to lean in, listening and learning more about the monotony of life as it is lived by people who have little in common with me. The journey has taken me to nursing homes, operating rooms, county jails, homeless camps, Hispaniola, Africa, churches, temples, mosques, and synagogues. It has cost me dearly, but with such rewards! I’ve found that people are hard to hate close up; that children often have the clearest vision. I’ve found that we are much more alike than we are different; that most of us are eager to communicate. Through it all, I’ve realized that we are all connected in a very difficult-to-explain way, and that connection is unbreakable. I can forget it for a while, but I cannot break it.

I’ve also found that there is so much more for which words have not been invented. And that’s where art comes in. My father was an artist. He worked as a commercial illustrator in the days before clip art. He was also a war hero, who suffered from PTSD for the rest of his life. His few oil paintings are dark, monochromatic renderings of fighter planes in tight formation. He was trying to say something that the society of that era wouldn’t let him put into words. Wise people say that the greatest tragedy of trauma is the loss of vulnerability. Dad could never let his guard down. But we had a common language in our art; him instructing, me learning. What we couldn’t share in conversation is right there on the canvas.

My dad shared his art language with me, and now it is my turn to share it with you. My version is not as dark as his. When I look at my portfolio, I see hope and a clear call to lean in. Start the conversation, listen with passion. Enjoy. And thank you.

The Bishop of Newtown