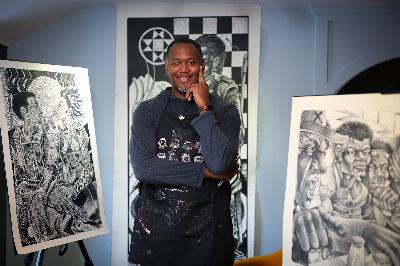 I, Steve A. Prince, am a native of New Orleans, Louisiana, and I currently resides in Williamsburg, Virginia. I am the Director of Engagement and Distinguished Artist in Residence at the Muscarelle Museum at William and Mary. I received my BFA from Xavier University of Louisiana and my MFA in Printmaking and Sculpture from Michigan State University. I am a mixed media artist, master printmaker, lecturer, educator, and art evangelist. I have taught middle school, high school, community college, 4-year public and 4-year private, and conducted workshops internationally in various media.

I have worked with several church’s of various denominations across the nation spreading a message of hope and renewal. I work with both two-dimensional and three-dimensional artistic practices while working with virtually every age bracket and multiple ethnicities. I am represented by Eyekons Gallery in Grand Rapids, Michigan, Black Art in America in Columbus, Georgia, and Zucot Gallery in Atlanta, Georgia. I have created several public works including an 8’ x 8’ mixed media work titled “Lemonade: A Picture of America” at William and Mary commemorating the first 3 African American resident students in 1967 at the college, a 15’ stainless steel kinetic sculpture titled “Song for John” located in Hampton, Virginia and a 4’ x 32’ communal woodcut titled, “Links,” commemorating the 400th anniversary of 1619 and the first documented Africans at Point Comfort (now known as Hampton, Virginia.)

I have received several honors for my art and scholarship including the 2010 Teacher of the Year award from the City of Hampton. I have shown my art internationally in various solo, group, and juried exhibitions. I have participated in several residencies including Artist in Residence at Segura Arts Center at Notre Dame University, Pyramid Atlantic Art Center in Hyattsville, Maryland, the Atlanta Printmakers Studio, and the University of Iowa to name a few.

The New Orleans Jazz Funeral tradition is the philosophical foundation of my work. The Jazz funeral is divided into two parts: the Dirge and the Second Line. The Dirge is the mournful portion of the funeral as musicians create the atmosphere for the witnesses. Once the body is laid to rest, the mournful tune is translated into a celebratory tune called the Second Line. The musicians play 2/4, syncopated music, to charge the atmosphere to celebrate the new life beyond this realm. I believe we can use the tenets of the Dirge and the Second Line to grapple with social issues and concerns.

The Dirge is synonymous with the deeper social concerns we must confront daily collectively. If we confront those issues we can experience a Second Line while we are alive. Printmaking and drawing are my primary mediums. In my work, I create a poly-narrative of symbols, metaphors, and designs that challenge the viewer to sift through the work to construct meaning, understanding, and ultimately, prompts for communal action. I believe that making art with a message operates in drawing us closer as a people, is connected to nobility that will never die.

Armor of God: Equipping Ourselves to do Social Justice Work