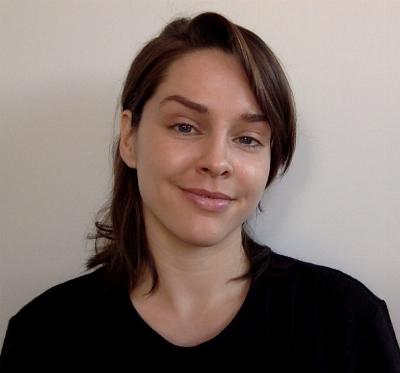 Trudy Elmore is a digital artist and animator living in Toronto, Canada.
Obsessed with mythology and technology, she is best known for translating dramatic master narratives into the digital realm. Trudy completed her undergraduate degree at OCADU in the specialization of Digital Painting and Expanded Animation (DPXA). She graduated with honours as Valedictorian and received the Governor General Award for academic achievements in 2016. She won the DPXA Capstone/Thesis award and then later in the year Equitable Bank's Emerging Digital Artist award (2016).

In 2018, Trudy participated in the world's largest XR fine arts exhibition 'Spatial Reality,' at the Sp[a]ce gallery in LA-- a sold-out show and the first of its kind.

Her thesis 'Stranded Assets' screened at Harvard University (2017), and in 2018 Trudy gave a talk at Harvard on the genesis of hybrid digital art. The Art Gallery of Ontario commissioned her second CG animation 'Algorithms' for their 'Massive' event (2017), it was then translated into a VR experience for the V/Art app (2018) and was shown last year in Madrid (2019) at the Hybrid Art Fair.

I am interested in how the new way of seeing -- mediated almost entirely through electronic screens-- affects our sensory perceptions, our sense of time and space, as well as our desire to find meaning in raw experience. I probe the collective anxieties of our contemporary culture that stem from guilt over individual and shared complicity in the unprecedented extinction of countless species and the ongoing distress of Earth. I explore the solace and diversion we seek amidst environmental catastrophes through technology-mediated social connection, interaction, and spirituality.

Michael Peter Olsen (musician): Michael Peter Olsen is a Toronto-based cellist, engineer, producer, film composer and grammy-nominated songwriter. He has recorded and performed on over 100 recordings including Drake VIEWS, Arcade Fire Funeral, K-OS Joyful Rebellion, Jim Guthrie Now More than Ever and The Hidden Cameras The Smell of Our Own.

Rich Williamson (editor): Rich Williamson is an Oscar-shortlisted filmmaker from Toronto. He graduated from Ryerson University in 2008 focusing on cinematography and editing and has since been shooting and cutting films, corporate videos, trailers and TV programs for well-known brands, as well as independent filmmakers.