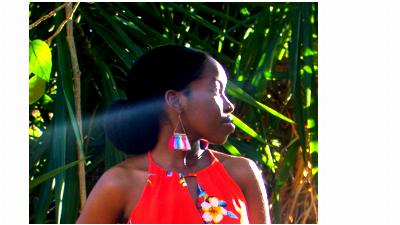 Yvonne Sobers
There are 3 key components, or passions, that combine to equal Me, Yvonne Sobers.
My fascination with foreign languages and film production commenced on entering high school where I was first introduced to the products of international cultures and media forms, opening my eyes to a new language as well as innovative forms of film and video. My interest in languages blossomed through film – from watching a recording of Romeo and Juliet in opera, sung in Italian, to my favourite childhood shows being aired in French. In late 2016, I was introduced to all that is Korean film and media. It was the first time I had ever been properly introduced to an Asian language and lead to me self-studying Korean over the past 3 years. I became enraptured by the different forms of media production and was highly entertained by the range that it offered in music, dance and film. I have since yearned to engage in this kind of creativity.

I have previously apprenticed with a graphic design firm, M-Grafix which gave me exposure to digital graphics and printing techniques for different media. However, my first direct exposure to film-making was a collaborative effort during the 2016 Errol Barrow Centre for Creative Imagination summer programme at the University of the West Indies, Cave Hill Campus. There we produced Unplugged as part of a team project.
I have since apprenticed with Amleya Clarke Photography using a Cannon Rebel t6i to shoot behind-the-scenes shots for portraits and commercial photography. This apprenticeship was expanded to videography where I received training in producing amateur short films which I edited for sound and video using Adobe Premiere Pro. These included Le Chateau, a French Short Film (2018), Le Chateau with English sub-titles (utilizing Veed.io) as well as independent student productions: Friends Over Water – Music Version (2017) and Friends Over Water – Voice Over. In March 2020, I directed and produced a short film, Reflection, a commentary on beauty standards.

The second component is my love for people. I am someone who believes in others and the fact that, united, people can make a difference. Making others comfortable and helping them when issues arose was never a challenge for me. I enjoy meeting new faces and names and motivating them to be better while working alongside them. This had made me a group leader in many projects and also assisted me as Class President; although I was initially nervous at those times, I am strongly embracing that side of myself.

The final key is my faith in Christ, through whom I can accomplish much and be at peace even when the pressure is substantial. I have been very blessed throughout many areas of my life and aim to bless others in whatever opportunities I encounter while following the path God has for my life.

A Legacy of Peace: The Ambassadors