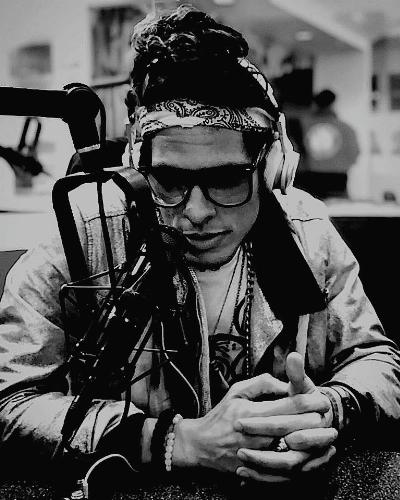 Greetings. I am John Engle (aka Prof. Johnee Engle).
I am from the kingdom of Queens, New York (via "SPACE").
I've traveled far and wide but Los Angeles, California is where I now reside. I am a professional visual/multi-media/performance artist, and “modern-day Renaissance man” who has devoted my entire life to the pursuit, application, and exploration of working in every different field and form of the arts. I’ve been creating art since as far back as I can remember, and my parents say that I was even "scribbling mini-masterpieces" on the walls of our brownstone in Brooklyn as a baby.
Since then, I’ve taken countless steps toward my development and practice as an artist and performer, each step seemingly occurring within a different state.
I began my practice mainly as a visual artist but also made music in a band, wrote and illustrated books and "zines", directed and wrote experimental videos, and engaged in absurdist and avant-garde performance art during the 1990s and my time at the Las Vegas Academy for Visual and Performing Arts.
It was during my days at the Academy that I began to seriously develop my artistic approach and perfect my craft. It was also during this time that I originated a genre and counter-culture art movement with my best friends that became known as “Thee Turbo ReVo!” as well as inventing a unique language, characters, and alternate spiritual universe connected to this new genre.
The “Turbo ReVo!” aesthetic that I developed during these early formative years would go on to inform all of the work I’ve created even up until the present day.

After my time at the Academy, I decided I wanted to go from the still images of paintings and drawings to the moving images of film and focused my creative energies on writing, directing, and starring in my own experimental films that incorporated multi-media presentations with live performance and art. It was around this time in the 2000s that I fully went beyond embodying my art as John Engle, and took on an alter-ego known as "Thee Professore:(!8o00%)”, aka “PROF” for short. From around 1999 until 2009, no one called me by my legal name again. Everyone, including the teachers, students, and staff of the colleges and universities I attended addressed me by the name/title of Prof, Professor, “!8o00%” or some variation therein, in what can be considered one of the longest-running underground performance art pieces in all of art history.
During my college years, I started at San Francisco Art Institute and then went to New York University, where I was awarded grants and scholarships to further develop my film, performance and art, as well as “Thee Professor” alter-ego and "Turbo ReVo!" style.
While at NYU ’s Tisch School of the Arts I was both a literal student and a metaphorical teacher, giving educational lectures about “Thee Turbo ReVo!” and screening films as "Thee Professor:(!8o00%)".
The creation of “Prof: (!8o00%)" is important to my development as an artist because I not only wanted to create art separate from me, but I was also interested in becoming the living embodiment of the artwork and alternate reality that I had created. In essence, a living work of art.
From here I began developing my other performance art alter-egos as well as the other imaginary "cosmic comic characters" within the “Turbo ReVo!” universe.

Symbolically and metaphorically, within the story/mythology of my art/performance,
I am a time traveler going throughout all of space-time, as well as the different dimensions and levels of reality, moving at the speed of thought.
Within the different paintings of my alternate personas, I'm interested in exploring and re-creating the realms of the metaphysical, alchemical, supernatural, mythological, other-worldly, spiritual, religious and paranormal, in an attempt to ultimately bridge the gap between these known and unknown worlds
One of the major things that distinguish me from other artists is the fact that I've not only created an original style, genre, and counter-cultural art movement, but I've also created an alternate universe and pantheon of characters with a story, cosmology, and mythology all it's own, known as "Thee Turbo ReVo!".
There was once a time when culture, art, music, philosophy, science, religion, spirituality, and so on we’re all connected, and not separate like they are today. I have the profound motivation to continue creating a community, society, and way of life that allows for the recombination and reflourishing of religion/spirituality and all of the arts and sciences, similar to the Renaissance but within today's world, and I call this culture "Thee Turbo ReVo!".

My life as an artist has led me to the realization that reality is truly poetic and mythic, and my job as an artist is to help facilitate the audience to not only an intellectual understanding of this but also a direct experience of the transcendental through the stories, archetypes, and artwork I've created. Thereby transporting the viewer from the limited and literal material world of the five senses into the unlimited metaphorical landscapes of the imagination as well as the heavenly realms.
Creating transfigurative scenarios similar to the reality experienced by artists, poets, visionaries, quantum physicists, shamans, sages saints, and seers as well as the religious, indigenous and spiritual cultures throughout all times who lived in harmony with the natural laws of space, time, and the universe. Thusly, within the “Luniverse” (which is a term I created, meaning a Universe made up of "L" for Love/the Love of God, and
"L + Universe = Luniverse"), and within this "Luniverse" we are all microcosms of the macrocosm, creating what I call the "mecrocosm",
(in-between the "micro" and the "macro" lies the "mecro").

My profound motivation is to share the story of this universe in as many art forms as possible, for "Thee Turbo ReVo!" is “the mythology of the past and the future, all happening within the present.”
The time is truly NOW, and my art mythos is meant to bring all timelines into a single explosive point.
Another major theme within my life's work is that we can change the world through the power of our consciousness, for everything within the universe is an origination of God's imagination.
Here’s a poetic/metaphorical way to describe the meaning and messages of my work:
“Let's go beyond the material limitation of worldly simulation back to the divine inspiration and actualization of our truest EmagiNation, as we defy the boundaries of space and time, re-uniting heart and mind. From the mythos of “Turbo ReVo” lore, we'll “re-evolve" into the re-animated archetypes from the days of yore…forevermore."
I am here to inspire people of all ages to be the ultimate animated and iconic version of themselves as well as ”Turbo Re-Evolutionize" the world through the art and story of our lives, for "the only limitation is our imagination". We are only as great as the stories we create, and together we'll create heaven on earth, as we awaken the dream, creating one of the greatest stories the world has ever seen.