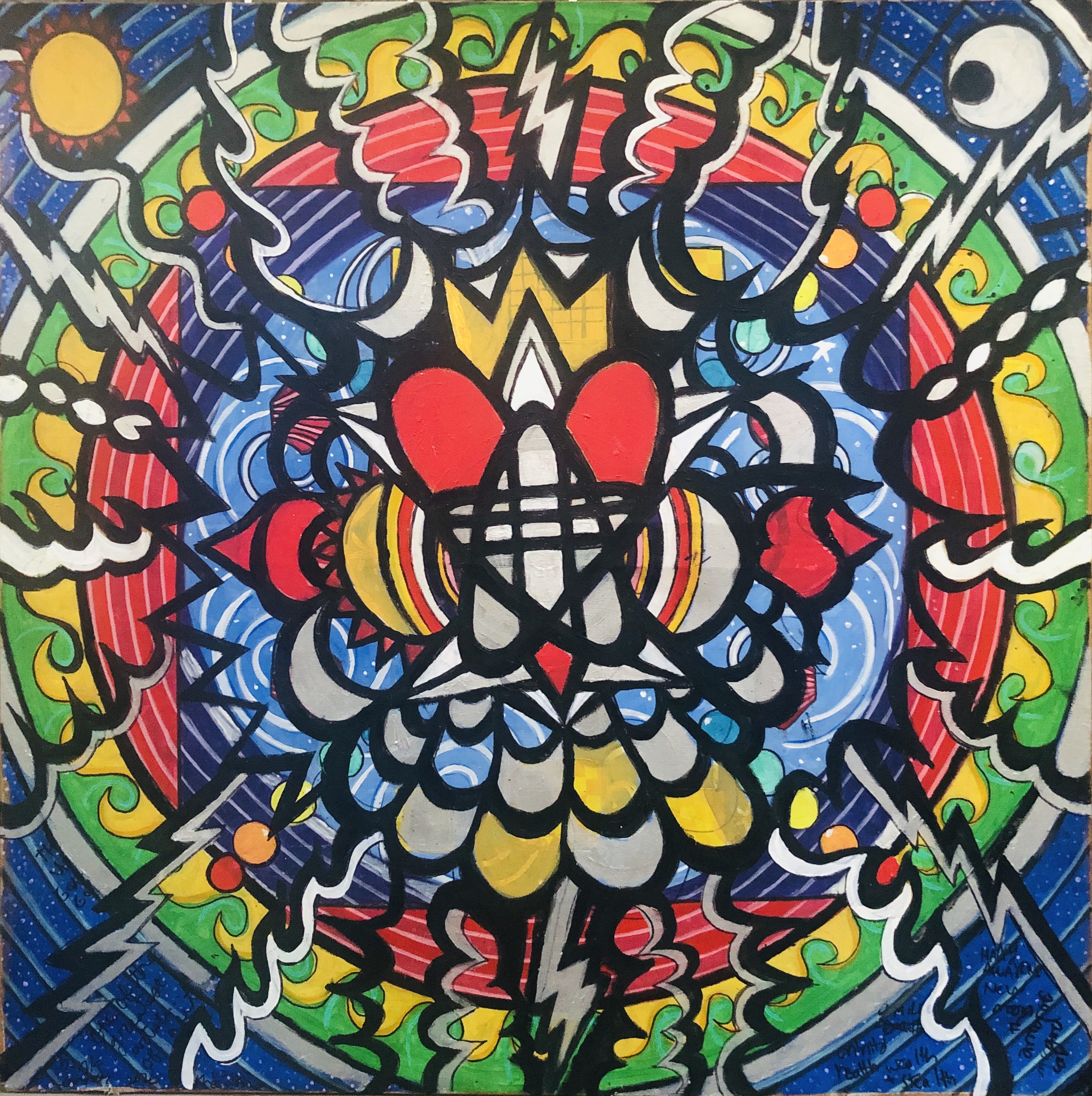 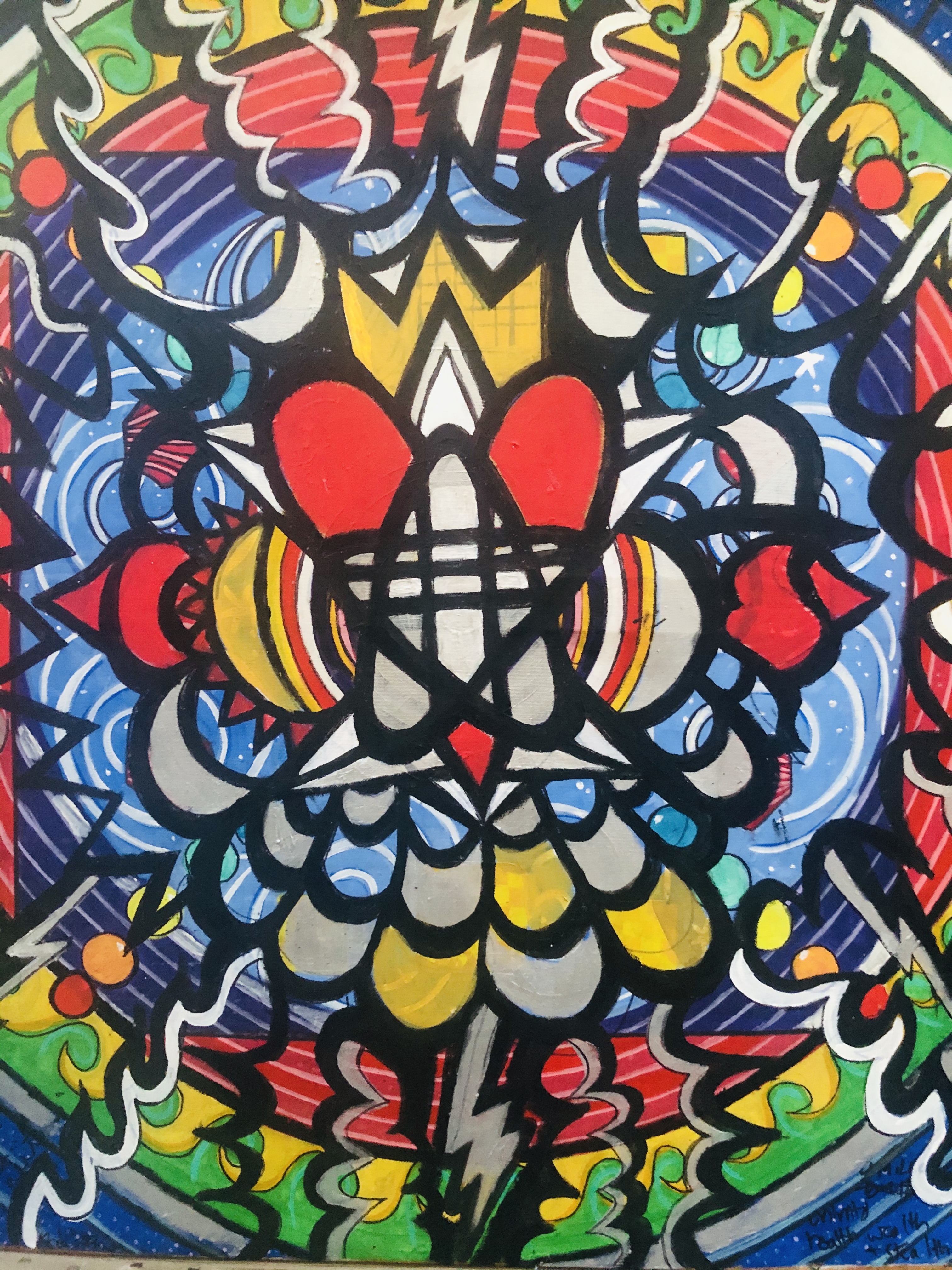 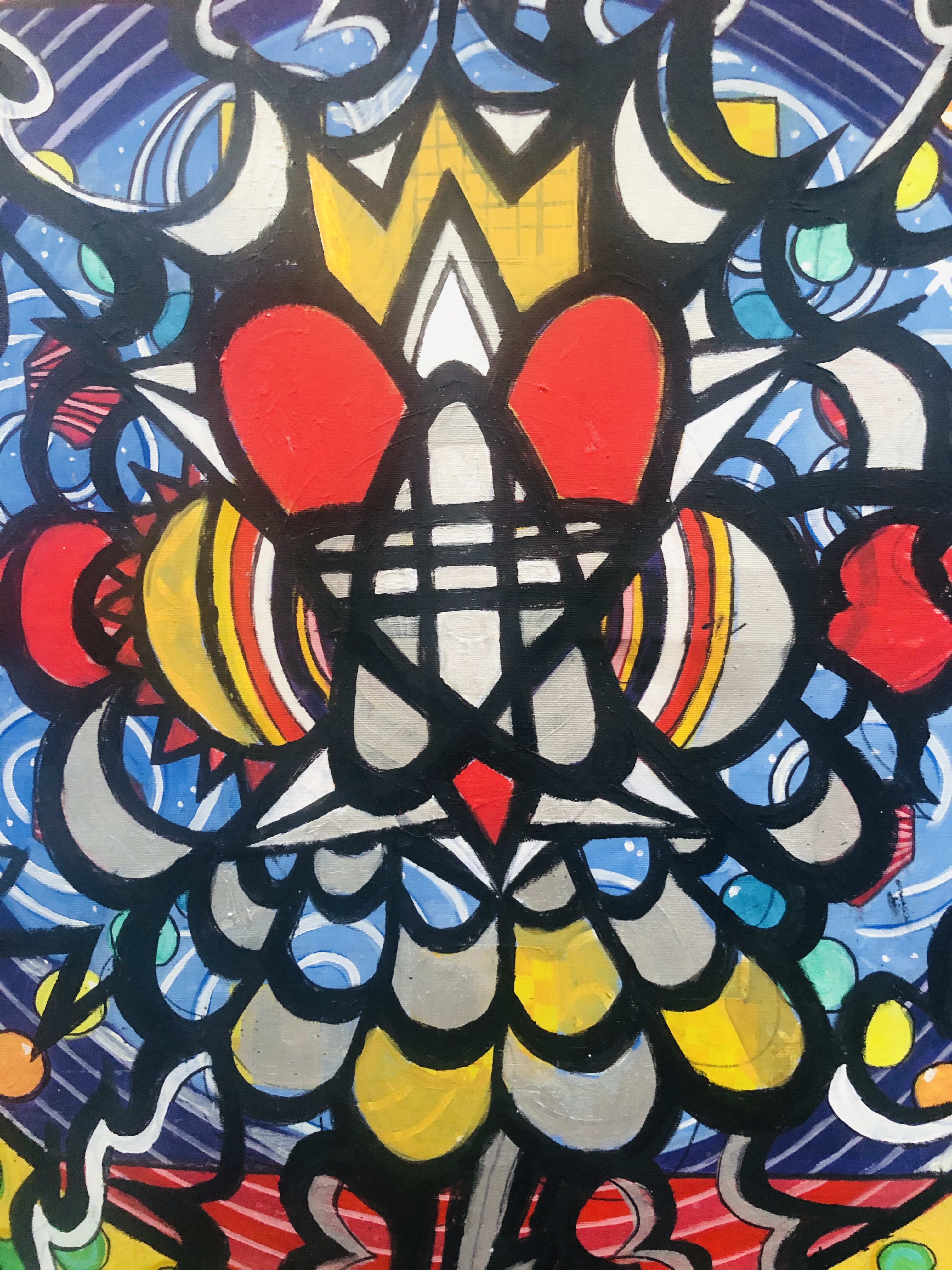 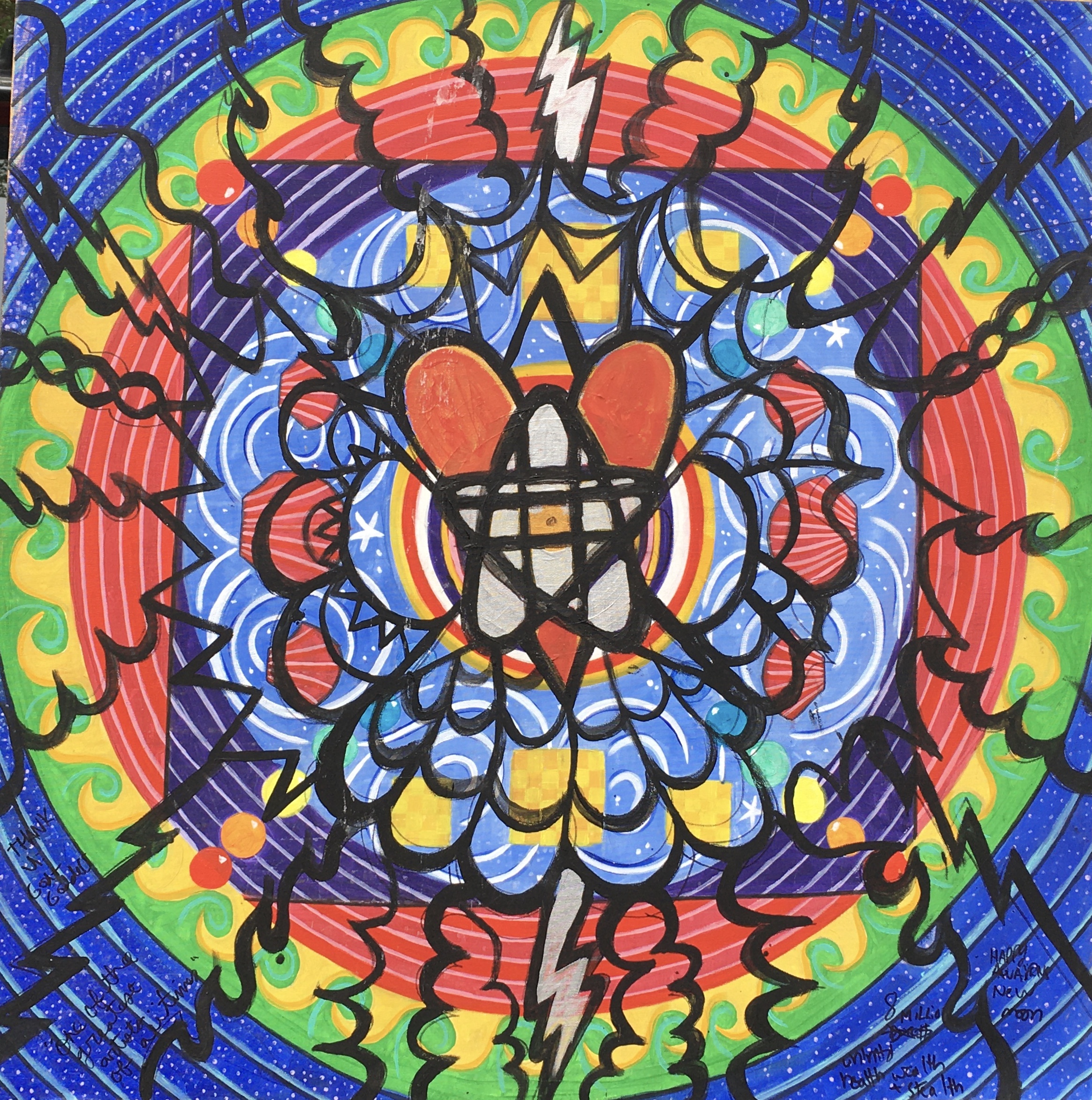 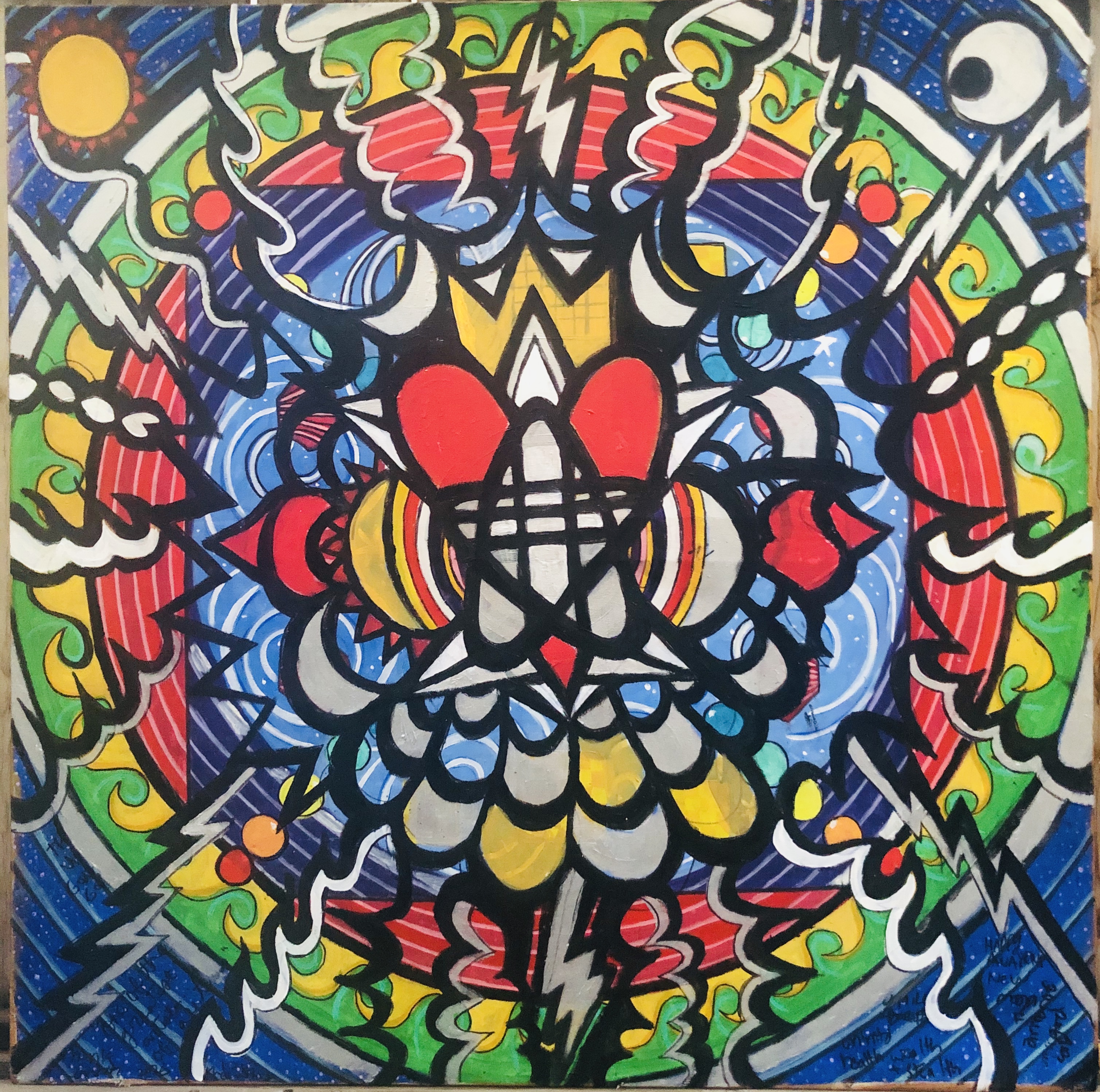 Greetings. Besides the themes related to the Spiritual Battle found in Ephesians, here are some of the other themes as well as the process connected to me creating this original work of art.

This piece involves a mandala-like image incorporating the logo that I created in the 1990s within the center. This logo represents a "Number" or hashtag, and a universal "Star". This symbolism was also the name of the original art company I created with my friend many moons ago. It was called "Number Star Co." This piece depicts the number and star overlapping one another in the center of an explosion, and there is also a heart and other sacred geometric shapes organically exploding from the center of the piece, resonating throughout the entire "Luniverse".
The number symbol also represents logic/left brain/solar energy while the star symbol represents imagination/right brain/lunar energy, and the two are harmoniously co-existing.

The different rainbow colors in this piece represent the elements.
Each color represents a different element.
Blue is water, red/yellow is fire, green is earth, and purple is air. The black exploding sacred geometry mandala outline represents ether.
Ether consists of (empty) space/dark matter/energy/akasha/chi and/or the invisible force that makes up the majority of the universe, seen and unseen.

This piece also involves "spiritual alchemy" and the transmutation of the four elements: earth, fire, water, and air, into the fifth element, ether. I'm here to alchemize all of the elements back into a state of balance through my practice as an artist. When one is able to harness the forces of nature and the elements, they can create true transformation and change within worldly reality on a truly mystical level. I began creating this piece on a full moon night and incorporated different religious/spiritual rituals into its creation, from lighting candles for the spirits to chanting, dancing drumming, singing, playing, praying, and meditating.

Part of my process involves combining ideas from art and science, metaphysics, mythology, religion and spirituality into cosmic art rituals involving a "spiritual alchemy" of the elements: earth, fire, water, air, and the fifth element, ether. Ether consists of (empty) space/dark matter/energy/akasha/chi and/or the invisible force that makes up most of the universe, seen and unseen. I'm here to bring all the elements back into balance through my practice as an artist, thereby making the impossible possible, through a process I like to call "The Alchemy of the Imagination".

I then channeled all of this spiritual and lunar energy into this work of art.
This piece symbolizes all of that as well as the re-balancing, re-neutralization, and re-transfiguration of the sun and moon, as well as the 4 elements into the 5th, creating a "Luniversal" sense of balance and harmony. You can feel the powerful energy resonating from within and the center of the cosmic "big bang" (pun intended, another one of the messages of my work is that science and religion are not at odds, and can simultaneously exist, in what I sometimes like to call "Soul Science"), from within the center of the mandala of this piece, which also represents an "explosion of love" and/or the "Explosion de la Corazon" (which is Spanish for the explosion of the heART, but it rhymes so I thought it sounded better)! For God is Love, and the Love of God is truly the greatest force in the Universe!

Universal Greetings!
This piece is an abstract/surreal/metaphorical interpretation of the Spiritual Battle found within the verses of Ephesians. This piece represents a universal coat of arms or shield, as well as an exploding heart of cosmic universal love. It features a cross within a star, it's the cross of matter and the star represents the universe or the universal man's transfiguration/transformation into universal love pictured as an exploding heart. I also took the symbol/logos that I'd usually use as a hashtag or number sign within my artwork and transformed it into the Cross.

The exploding heart is the true armor of God, for it is the love of God and the Father/Mother, Son, and the Holy Ghost that allows for a true inner and outer transformation of the spirit to take place. This universal exploding heart of God/Jesus is literally exploding throughout the entire universe of the cosmos and penetrating every particle of energy, thereby not only eradicating any evil but also transitioning any and all energy beyond the duality of good and evil to a truly harmonious state of loving bliss, a heavenly enlightened way of being and seeing within the heavenly realms of existence.

Exploding from the star and the heart is a hexagram/Star of David, aka a tetrahedron, which is known as a multi-dimensional star of David/hexagram, also known within more esoteric religious and spiritual traditions as the space-time vehicle which once activated allows for time travel between here and alternate dimensions of reality and thought, from the material plane to the more cosmic and heavenly realms of existence, allowing us to move beyond the material world of Satan to the heavenly realms of God, and for me, heaven is also akin to space/the universe. At the top of the star explosion is a crown, representing the Lord Jesus, aka the King of Kings, and on the left of the explosion is the sun, on the right is the moon, and in the center they are eclipsing one another, symbolizing a balance of the light and dark, sun and moon, good and evil, etc.
Within this piece, the color gold represents the sun or solar energy and the color silver represents the moon or lunar energy, and the silver also represents the color of armor and/or the literal armor of God.

This is all exploding out into the Universe in the form of the original cosmic worldwide web, connecting all things within the universe, and coming from the explosion is symbols representing the 4 elements: fire, water, air, earth and the 5th element of ether, which when fully activated and brought into balance brings about a true transformation from the world of flesh into the world of spirit. There are also DNA strands as well as lightning bolts shooting out from this visual explosion as well, representing "galactivated" energy and a turbocharged form of love and enlightenment occurring on simultaneously personal, global and universal levels of reality.
I call the lightning bolts "EnLightening" bolts, symbolizing cosmic awareness, awakening, and being struck by a true love of God.

All of this is happening on a grand cosmic universal scale, from the microcosm to the macrocosm, all the way to what I like to call the "mecrocosm". This piece is also meant to visually represent the ultimate metaphorical shield (and field) of faith. Your faith has got to be greater than your fear, and it's all a great love of God here.
I've also created my own language, and I use some of these words within the title of this piece. I spell the word apocalypse as "Epochalypse", as in an epoch or great cycle of time, and the original meaning of the word apocalypse which is a great unveiling, thusly this piece's title represents that's we are shifting into a time where all the great truth (& lies) of the world shall be realized, thereby shifting us all into a new epoch or time period and way of being, also known as "The Great Awakening". And I turned the word miracles, into "mirror cools", for this piece is meant to reflect to us that we are all miracles aka mirror-cools reflecting the glory and majesty of one another back to each other through the true love of God. This iconic work symbolizes the embodiment of putting on the full armor of God, and is also meant to represent "The full Galactivation of one's Christ Consciousness to the enth degree times infinity, For thee Love of God and by thee Grace of Goddess, we did it". Thank God!

An Original Work of Art
$33,000
Acrylic Painting with a great deal of Performance Art incorporated into it.
They can purchase this work from me, Thee Artist, directly.
You can order it from me and I can mail it to you, or if we're in the same location we can meet in person as well.

I specialize in all different fields & forms of the arts, from visual to performance, multi-media to music, film making, and creative consultations as well. I am a "passion designer" and do custom and commissioned works of art, from self-portraits of you in my "Turbo ReVo!" style as your inner-child, cosmic comic character/super-hero, or other universal archetypes, to customized logos, tattoos, murals, and anything else creative, if you can imagine it I can bring it to life for you!
I'm a filmmaker, writer, and director as well.
I've also worked in creative events/art and music shows/nightlife parties/the visionary and contemporary art scene and at transformational festivals exhibiting my original artwork and performing as a dancer/drummer/percussionist, comedian, and event host/MC as well. Thusly, if you need edutainment of any kind, you can also hire me for that, I am also known as "Thee Life of Thee Partee", and my slogan is "We put thee arte in thee partee". Feel free to contact me regarding any and all creative and/or art-related projects.

The Fruit of the Spirit

Onslaught of the Unseen

"Out of the Ashes

My Shield of Faith

The armor is within