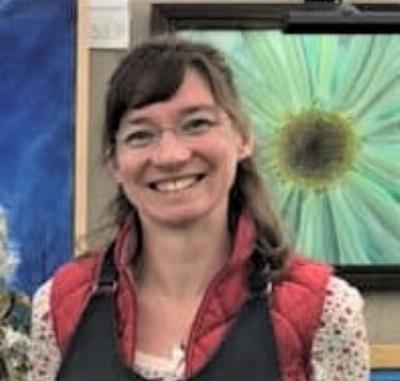 Katie Roberts was born in New York. However, her parents moved while she was months old, and so, rural Vermont became her home.
Growing up without television or modern technology, Katie was entirely self-taught. She developed her art talents completely in drawing with pencil in her early years. She did not pick up color until she was a teen, and then quickly turned to acrylics for much of her adolescence. Alongside a successful science career, Katie pursued her primary passion, her art. Spending most of her time as a child in the woods of Vermont afforded her a beautiful opportunity to view the wildlife that resided there. Katie was in constant watch of the animals, plants and weather that made up the rugged landscape. Her artwork bespoke of her love and detailed representations of these subjects. In these early years, she regularly created artwork on commission. The Vermont Department of Fish and Wildlife requested her to develop artwork for their WMA signage for protection of wildlife from domestic dogs. As an adult, Katie turned primarily to her art as her soul's fullfillment. Oil painting in her fourth decade became her primary medium and she also began changing over to environmentally friendly materials: water mixable oil paints, mediums and cleaners, rescued slab would and eco varnishes for framing, and bamboo prints of her artwork - even recycled shrink wrap to protect sold paintings.
In this time, Katie attended numerous art shows and group exhibits. In the fall of 2017, after her switch from science to art, Katie's art career blossomed. She received her first art award, the People’s Choice Award at the VINS Art Festival in 2017, and then received a second and third the following year in the same catergory, as well as the Best Riparian Award. She was also represented in the Vermont Standard for two of her paintings in this exhibition. Katie also commisioned pieces throughout this time - her most recent, two multi-walled murals for Drewski's on the River, the Vermont Experience and the Chaotic Kitchen, as well as a private commission, Life's Changing Path mural, in 2019. She now actively demos and sells her pieces online, at art shows and at gallery exhibitions.
Katie's primary focus in 2020 and beyond is to donate part of her art proceeds to wildlife conservation. She is a member of the Artists for Conservation, an international non-profit which supports wildlife and habitat conservation and environmental education through art. She believes in raising awareness to the plight of specific species in need, as well as the dwindling biodiversity in general and hopes to contribute to creating a better future for both through her art.