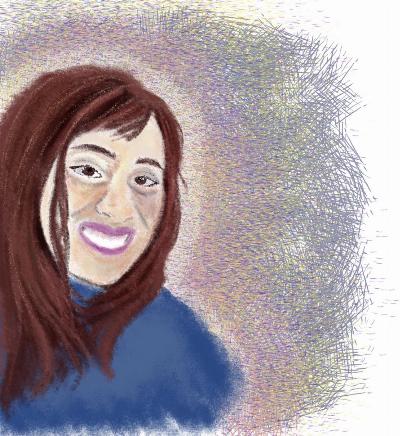 Katina Lowe was born Katina Sares on March 12, 1981 in Toledo, Ohio.
After attending the University of Denver for her BFA in Electronic Media Art Design in 2003, Katina worked as a freelance designer for several years. She then attended Cranbrook Academy of Art in Bloomfield Hills, Michigan where she studied Print Media under noted printmaker, Randy Bolton. In her first year, Katina was awarded the David R. Zimmerman Merit Scholarship. She received her MFA in 2009.
Katina lives and works in Denver, Colorado as an artist and educator. Her installation on the moment of belief, Now Go Make Disciples, was shown in both Michigan and Colorado venues, including University of Denver’s Victoria H. Myhren Gallery and the Temple Tantrum festival in Denver’s Rhino district. After being both Vice President and President of Christos Collective Community when it was an LLC, she is now considered the general manager of the community aspect of the newly appointed nonprofit organization. Since graduate school, Katina has continued to exhibit throughout the Denver metro area as well as nationally. Though she works in different media and enjoys experimentation, installation art is her first love, and she has spoken at public venues educating the public on installation art. Her topics focus on the paradoxes belief creates along with the prejudices, fears, magic, narrative, and mystery present within the human spiritual experience. She links these ideas through familiar human anatomy such as hair and hands. After Becoming a mother in 2019, she is excited to see how her new role will play into these concepts.

Katina is an instructor at Colorado Christian University, teaching Art History, Digital Photography, Creative Arts, and C.S. Lewis in Film and Literature. Until recently, she taught college level studio art and photography at a private Colorado high school. Currently, in addition to her art practice, Katina is starting her own creative consulting and art product business. Her partnership with the NPO ministry Turning Point of the City and their annual fundraising events have brought some success in recent years. In her free time, Katina enjoys writing, gourmet cooking, and outdoor recreation in the forms of cycling, camping, mountain biking, and hiking.

Emmanuel, God is with Us