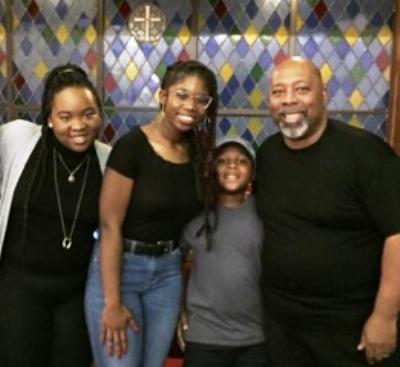 Luther Blackwell received private training and secondary training at Berklee School of Music in Boston, Massachusetts, Oberlin Conservatory of Music in Oberlin, Ohio and the University of Bridgeport in Bridgeport, Connecticut.

Mr. Blackwell has independent film and record companies, BSMF Films and LuNeIs Records.
Luther has written more than 400 songs, plus musical scores for Off-Broadway shows. Credits include: "Generation X," "The Game", "Let's Go", "The Grinches that Stole Bridgeportville", and
"Marginal Saints”. "Marginal Saints" is a 2003 winner of the New York International Fringe Festival and a feature length movie, filmed in 2005. In 2006, Luther with Bob Ramos of
“Sports Talk in Black ‘n’ White” and “The Bottom Line” completed a documentary on the greatest football player of all time – the legendary Jim Brown – entitled “Jim Brown UNPLUGGED”.

In addition to teaching, he has been instrumental in giving youth the opportunity to learn and participate in the performing arts as co-founder of Shiloh Academy of the Creative Arts, Hall Academy of the Fine Arts, and founder of Original Works, Inc. Original Works Inc. was selected by the Connecticut Commission on the Arts, Connecticut Commission on Children for the Arts, and After School Demonstration Initiative as one of three pilot sites. Luther was the videographer for Roosevelt Elementary School’s “President Obama's Arts and Humanities Turn-Around Arts Initiative” in 2015-2016.

Theatre Forward hosted a Black Tie Gala Fundraiser at The Pierre in New York in 2018 and Chloe' was selected to perform her August Wilson monologue for the event. One of the celebrities there was actor, screenwriter, producer and playwright Chazz Palminteri. After Chloe' performed, Chazz took her hand and said "Young lady you have the gift not too many people have, the natural gift, but you have it. You will audition for different roles and you may not get every part you audition for, that is only because you are not what they are looking for at that moment. But don't stop because you are going to make it. And how old are you, 15 years old – Oh, My God!!" Also that night, Mr. Wilson’s wife, Constanza Romero, hugged Chloe' and told her "August would have been so proud of you.”

Chloe' was 15 years old and a freshman at Cooperative Arts and Humanities High School, where she is majoring in Theater. Chloe' has been acting in original plays and short films from the age of four with her father's company, Blackwell's School of Music and Film and his non-profit company, Original Works Inc. and has been very dedicated to it. In the past, she performed in “Hairspray”, “Annie Jr”., “Still Life With Iris”, and “Bugsy Malone”. She has also done behind-the-scenes work with the play Alice and Wonderland. Though Chloe' has a true passion of being on Broadway or making it to the big screen, she understands that in loving education, as well, it can get her further than performing on a stage. Chloe' is currently taking Chinese for her language in school and has become very fond of it. As a result, she is a US-China Student Ambassador with Yale University and desires to promote the Chinese culture and language. Upon graduation, her desired colleges are Yale for her MBA and NYU Tisch for Drama. Chloe’s inspiration is seeing actors and writers create a piece that has meaning and that can have the power to make an impact on people’s lives. She wants her acting to have a positive effect in the show business and throughout life.

Jendaia Stevens is an actor/singer. She was a 15-year old freshman at Capital Prep Harbor. Jendaia started dabbling with the performing arts at a young age with her first play, “The Oz”, in the 1st grade. Jendaia has opened for the popular gospel group, "The Walls", at the 2018 New Haven 20th Gospel Fest. She is a lead singer for The New Hope Missionary Baptist Church Youth Choir, has performed at Bridgeport Connecticut Town Hall, and she placed in the 2018 Annual Martin Luther King Contest. Jendaia will be releasing her first gospel single with a selection from the Gospel Play “Being 15 entitled “Ask For More”. When not performing, Jendaia enjoys cheerleading for her school and spending time with her friends. Jendaia plans are to attend a performing arts university after finishing high school.

Clipped Wings Of An Angel