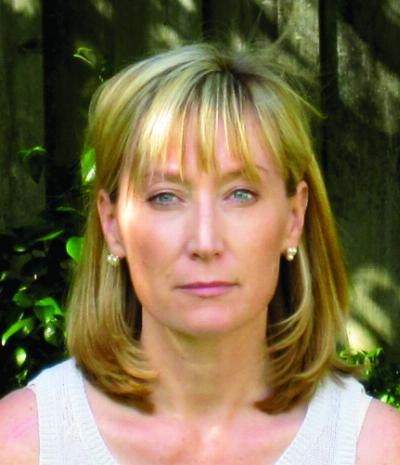 BIOGRAPHY
Mel Ahlborn (born 1958) is a contemporary artist whose artistic expression draws upon cultural symbolism with historically complex commonalities. Her commercial works for education and business illustrate, brand, present, and instruct using print, multimedia and interactivity. Her fine art works for exhibition and collection represent contemporary human experience, and use the visual language of Christianity to explore identity, tradition, and story.

Early Life and Education
Ahlborn grew up in northern New Jersey, attending St Philomena’s School in Livingston and Mount St Dominic Academy in Caldwell. She graduated from Tufts University with a BS in Chemistry and Classics, where Professor Emeritus John W. Zarker profoundly influenced her interest in the application of chemistry to the science of archeology. Ahlborn then studied in the Department of Archeological Sciences at the University of Bradford at West Yorkshire, UK. At Bradford, she was introduced to neutron activation analysis and x-ray diffraction, and researched the chemical composition of pre-400 AD Roman-era pigments on minster wall murals at York [Eboracum]. Through the Society for Calligraphy and Friends of Calligraphy, Ahlborn studied lettering arts with Ed Fong, Lothar Hoffmann, Louis Lemoine, and Peter Thornton. In correspondence with Donald Jackson, she applied her studies at Tufts and Bradford to the historic techniques of manuscript illumination, iron ink, vellum, quills, gilding, and methods of book production that have fallen out of use since the invention of movable type. Years later, her children grown, Ahlborn attended Academy of Art University in San Francisco, California. As a graduate student in Fine Art Painting, she studied under Mark Tennant and Zhaoming Wu. Ahlborn studied portrait sculpture in clay with Philippe Faraut.

Career
After college graduation, Ahlborn was employed in the aerospace industry. She left her career to start a family with her husband, Paul, and they have two children. Ahlborn organized her freelance work into Illumination Studio in 1989, providing creative solutions to clients around the world. In 1996 Ahlborn worked with The Getty on “The Making of a Manuscript Book” exhibition for the museum’s newly opened Illuminated Manuscript galleries, and in 2003, “Treasures of a Lost Art: Italian Manuscript Painting of the Middle Ages and Renaissance” with the Fine Arts Museums of San Francisco. In 2000 Ahlborn joined the Board of Directors for the newly founded Episcopal Church and Visual Arts.’ She served as Board Member, Executive Director, and President, retiring from ECVA in 2020. Ahlborn taught manuscript illumination at CARE/GTU and visual art at CALL/CDSP, Berkeley, California. From 2003-2008, she created a series of Distinguished Alumni Awards for the University of Pennsylvania.

The Apple and the Pomegranate