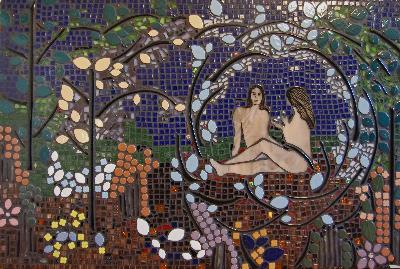 I was born in Lowell, Massachusetts, in January 1947. I attended Catholic schools. My mother was widowed in 1957 and married a military man in 1959. My two brothers and myself then traveled to Ulm Germany for my stepfather's tour of duty. In 9th grade in Germany, I met my husband to be and we married when I was 18 and he was 20. He also was in the military. We have three daughters and three grandchildren and have been married for 54 years. We have lived in multiple places and finally settled in Wilmington, NC, where I have a home studio and am also a member of an art community at theArtWorks™ in downtown Wilmington.

I work on something art related every day and wake up grateful to be able to do this work. In 2001, a year before I retired from a technical job in the Defense Department, I took an adult education stained glass evening class and fell in love with glass. Since then, I've added fused (melted) glass bowls and platters, cast glass, mosaics, and collages to the list of glass related products I create. I also took 40 semester hours of art classes along with many short-term classes and workshops. I try to design and fabricate work that will edify the spirit of the people who see it or buy it. After studying comparative religion on my way to what I thought was becoming a fashionable Buddhist, I became a Christian in January 1977 at the age of 30.

I'm the only human on my team.