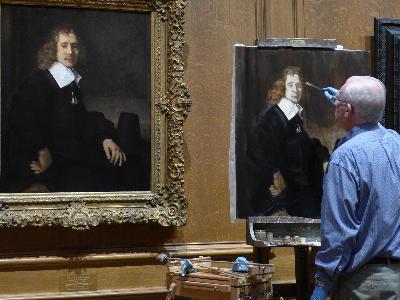 Gordon has a broad interest in the arts and the Christian gospel. He is the founder of PAK7, a media ministry. He now works primarily in the medium of oil painting. He is a copyist at the National Gallery of Art in Washington, DC and a member of the Art League in Alexandria, Virginia.
Born in Glasgow, Scotland in 1948, he earned an M. Div. at Gordon-Conwell Seminary with additional work at Harvard University Graduate School. He has studied oil painting at the Art League School in Alexandria as well as the Scottsdale Artists’ School with such masters as Rob Liberace, Christine Lashley, Danni Dawson and Rose Frantzen.
He has exhibited his work at the Art League Gallery, the Gallery Without Walls and the Del Ray Artisans Gallery and his work is represented in various private collections in the US and internationally. In 2014, he painted Fidelis ad Mortum, a posthumous portrait of Esther John, one of the Ten Martyrs of the Modern Era. This portrait is featured on the Westminster Abbey website. and the original hangs in the Lahore College of Theology. He lives with his wife Pamela in the Town of Chevy Chase, where he has a studio.