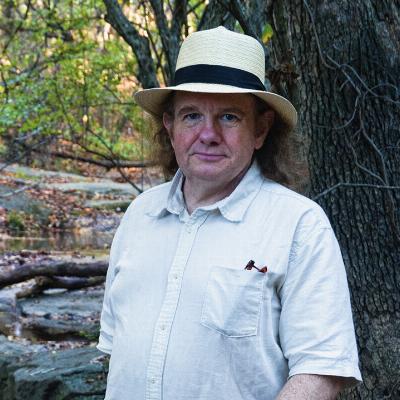 Photographer James C. Williams specializes in infrared film photography and digital imaging. His choice of subject matter ranges from ancient ruins, holy wells, stone circles, and Neolithic tombs to lavish gardens, sweeping vistas and dramatic landscapes. Trees and powerful skies are common to most of his photos, as well as many cemetery statues and crumbling ruins. He seeks unique locations which are both visually dramatic and rich with history, myth and stories.

Williams' favorite medium, infrared film, differs from other films in that it is sensitive to light beyond the range of human sight, giving an etheric visual representation of reflected infrared light to black and white photos. Kodak discontinued his film of choice in 2007, so Williams keeps a supply of it in deep freeze storage.

Williams plans to continue his current body of work “The Sacred and the Ancient” until his supply of infrared film is depleted. He is also working more in both color and black and white digital photography, embracing the difficult techniques of low light and night photography and exploring the surreal qualities of landscape light painting. Williams is currently working on images captured from recent travels Puerto Rico, as well as revisiting unprinted latent images captured over the past ten years in the United Kingdom.

Williams has exhibited his work internationally, beginning with his first show in The Republic of Ireland in 2005. By invitation, he exhibited work with the Chalice Well Trust in Glastonbury, England, for their 50th anniversary celebration. He was the recipient of the Arts Council of Winston-Salem and Forsyth County’s Regional Artist Project Grant which partially funded his photography travel to England in 2010. He has been an active member of the Winston-Salem arts community for over twenty-five years.

In 2004, after many years of working in video production, James C. Williams became interested in learning the art of still photography. Williams was encouraged to take up photography by late British photographer, Sir Simon Marsden, whose work continues to inspire him. It was Marsden who urged Williams to try the very difficult medium of infrared film photography. Educated in traditional film photography and darkroom printing by his wife, artist Amy Funderburk, Williams and Funderburk currently live in Winston-Salem. Williams has recently returned to shooting video and screen writing.