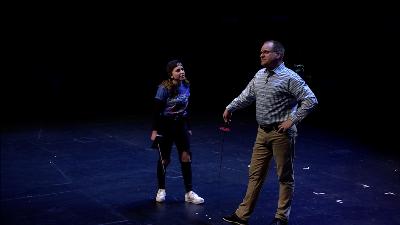 MARK STODDARD has a passion for creative storytelling, building community through the arts and mentoring artistic leaders. He has over 30 years of experience as a professional actor, theater director, script writer, video producer and arts educator. Mark has an MA in Educational Theater from New York University, and has taught all aspects of theater for colleges, high schools, conferences, workshops, and numerous summer camp programs. He serves as the Drama and Theater Director at Dream City Church in Phoenix, AZ - where he writes, directs and performs in original sketches, plays, musicals, short films and produces ‘Celebration of Christmas’ – one of the largest holiday shows in the country, and Broadway musicals including Beauty and the Beast, Mary Poppins, Little Mermaid, Annie and more. He has directed over 300 plays, musicals and original productions in the Phoenix area and has multiple ‘Ari-Zoni Awards’ for theater excellence. Mark’s family is heavily involved in the arts – his wife Rachel is an accomplished choral conductor and runs a successful private voice studio. Oldest son, Philip, is an alumni of The Juilliard School with an MFA in Acting; Stephen is an accomplished acapella group singer and vocal percussionist; Zachary is a choral music education major at Northern AZ University and president of the choral union. Their doggies (Jeter and Nugget) love music too!