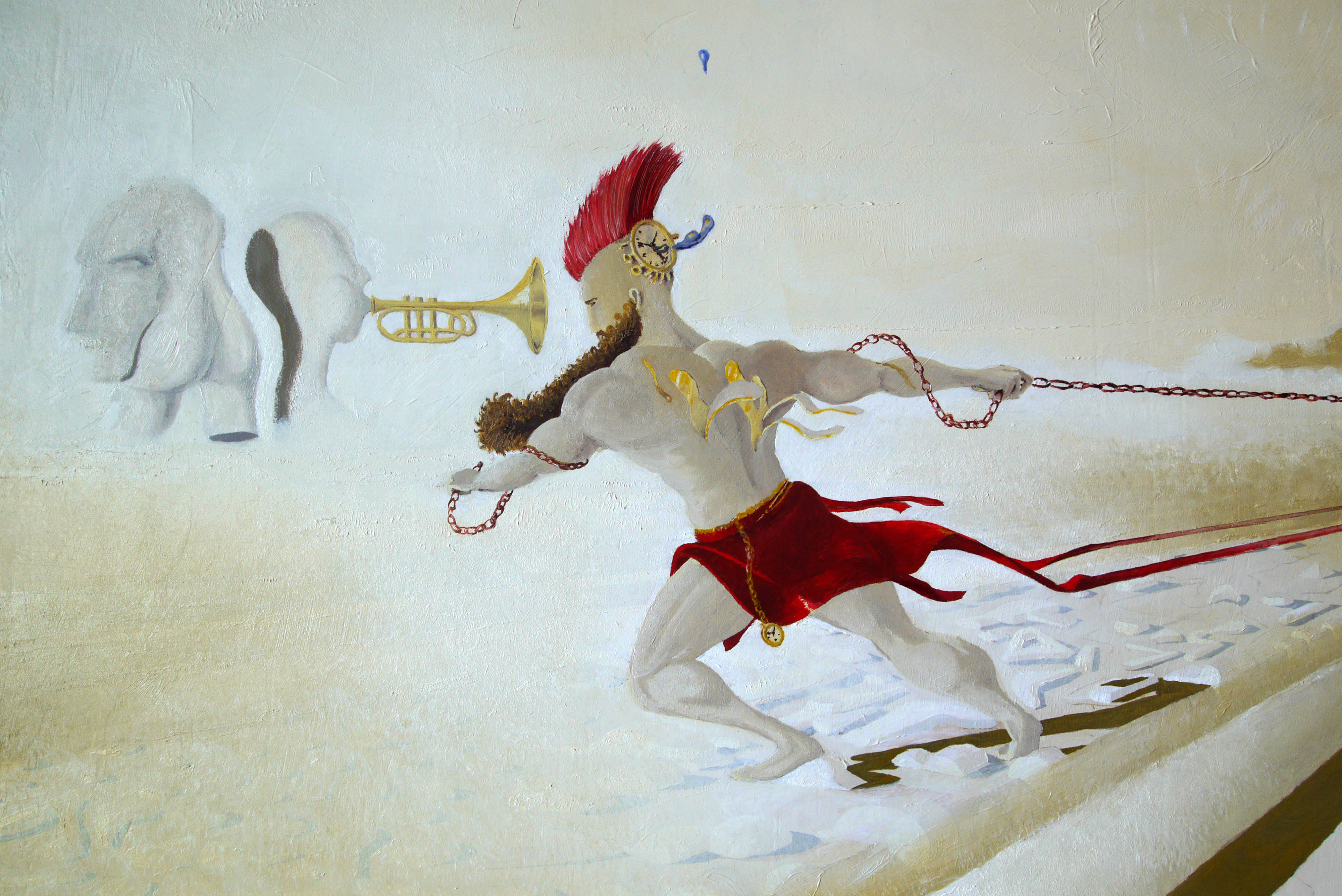 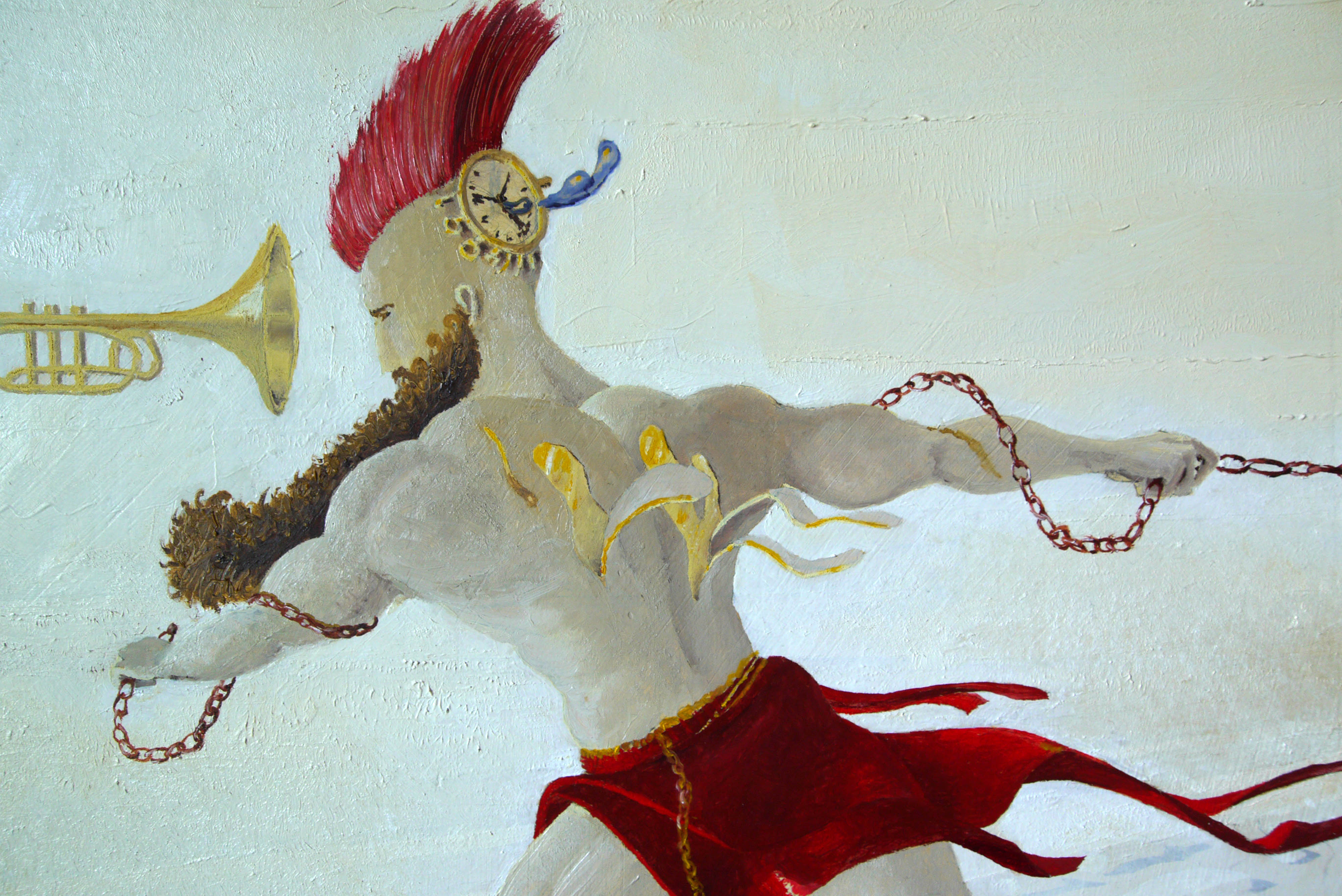 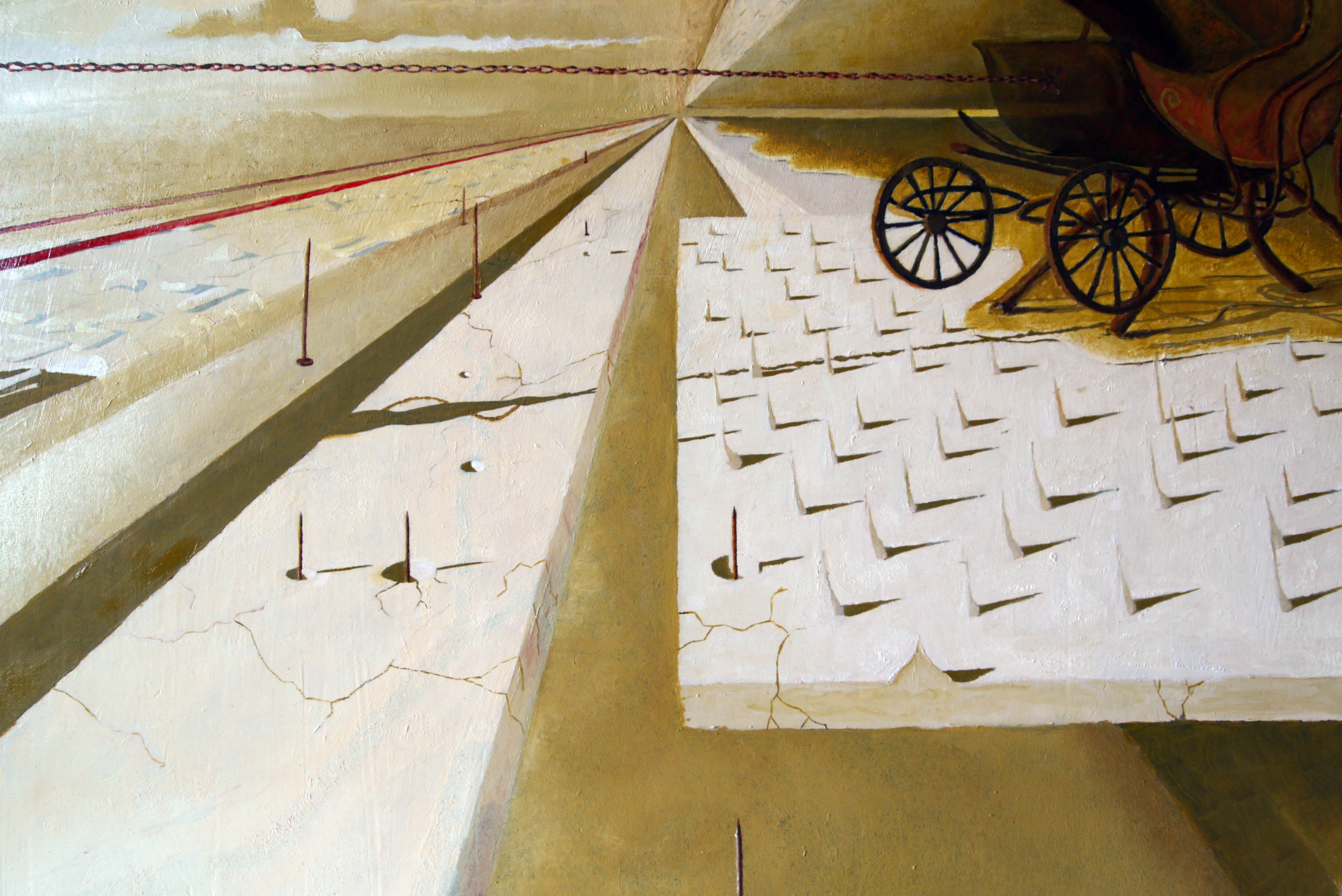 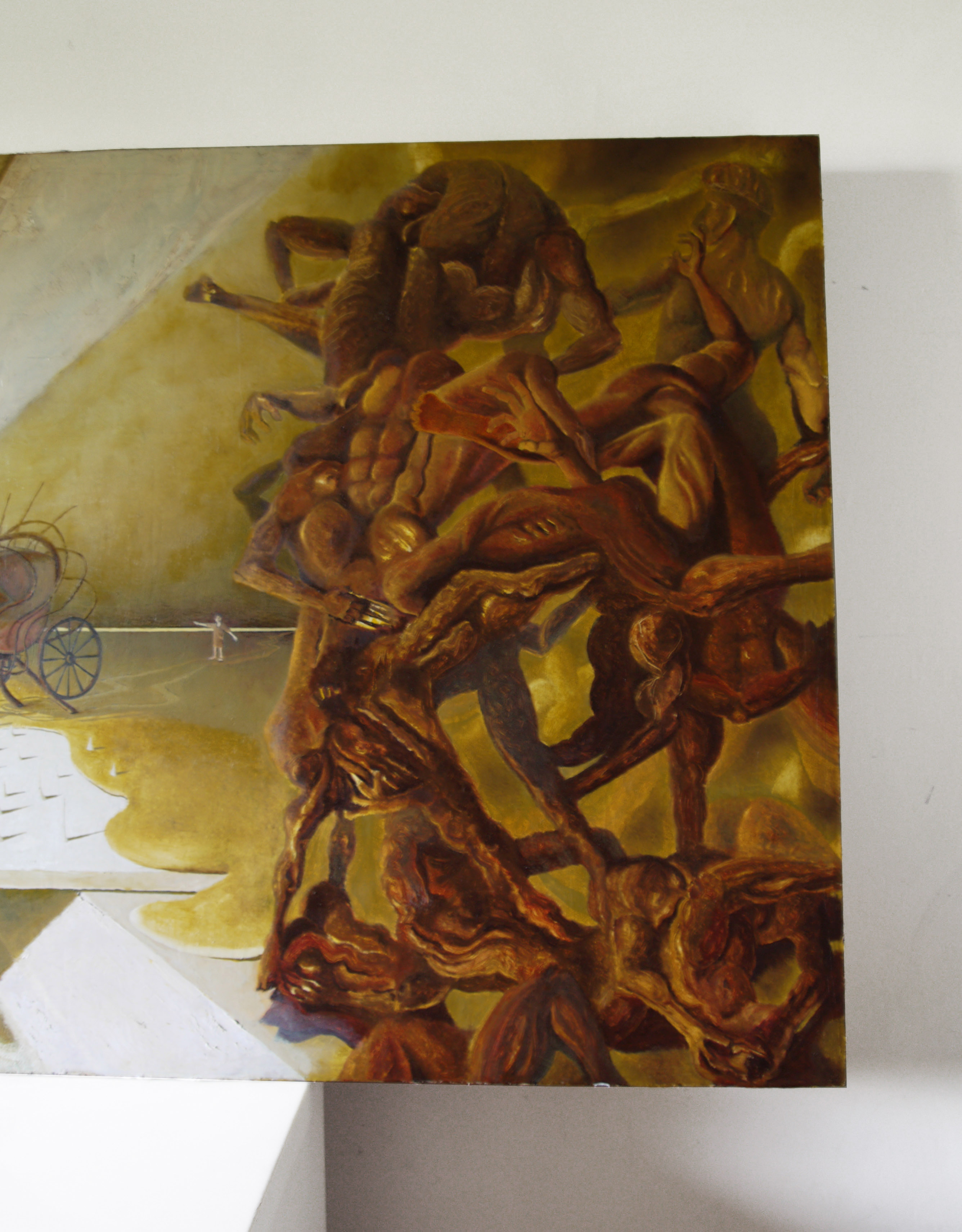 I was born on 21 October 1989. I have a Master's degree in interior architecture. I am self taught when it comes to drawing and painting. In my paintings I talk about things that I find interesting like: human virtues, other countries and their cultures, my emotions, my life, hardships of life, war and history. In one word you could say I inspire myself from "life". My process of creation always starts with a visual idea for the painting, ideas that I get from from dreams, from reading interesting things or just watching nature. The visual of a painting I am doing is important, but the idea behind it is also very important. Because I am fascinated by animals, I sometimes use them as symbols for what I want to say. Also I try to give the paintings an immortal look so that someone watching it couldn't say exactly when it was created . I also like working with surreal because I can show new things that don't exist. What I really want to achieve through my work is to create an art that can withstand the test of time, like old Master's paintings do.

1) The story
The story of the painting starts with the book "Iron John" written by American poet Robert Bly. Alex found himself in the idea of Katabasis because of all the hardship he faced during his latest years, so he decided to capture this moment of his life in this painting.

The Katabasis painting depicts probably one of the most important moments in the life of each man, and that is the moment and process when each boy becomes a man. ( growing up )
Back in the days in different cultures ( Katabasis comes from the ancient Greek word: κατάβασις, from κατὰ "down" and βαίνω "go" ), Katabasis was seen as a ritual that each boy would take part in. You can see it also in the "300" spartan movie, where the boy is taken from his family and he is given the task to kill a dangerous wolf. When he returns home, he is changed. But in real life the Katabasis can last much more and can be a far more exhausting mental warfare for a person.

Katabasis is seen as a descend into an "underworld", which Alex relates too because of the whole system of life, all the small jobs you have to do in order to survive, especially as an artist. And all the loneliness that sometimes comes in this moment in life.

2) The symbols
The painting contains many hidden symbols and things that happened in the artist's story and we shall further explain all of them.

First let's observe the whole image of the painting. The right side looks crowded and agitated, while the left side is very simple and empty. This transition from dark to light represents the transition of life from the hard katabasis to the better future that is coming for each of us. Life usually gets much easier while we grow old.

Going deeper into the painting we can observe, in the right side, a space filled with many people fighting, space that takes 1/4 from the whole painting. This area represents the struggle of the Katabasis and it had to be a big portion in the painting so it can draw attention to it. Some of the people fighting are painted with fine details while leaving the ones from the bottom to blend into each other.

All these people sit under a big block of concrete. The big block has the purpose to show the pressure that the artist is going through in this moment of his life. Also under the big block there is a vast desert and a single child that has only one sandal in his foot. The desert is the actual desert from California. The child with a sandal is a symbol of poverty that governs the katabasis process. When you don't come from a rich familly, sometimes you do feel the lack of money.

But why is the man in the painting dragging a carriage after himself and why a carriage ?
The carriage is a symbol of hope and future. The carriage is something that can take you places, like a car, that can help you. But that can only happen in the future. Now, in the katabasis, you have to fight, that is why the carriage for the time being is seen as something very heavy that the man is dragging after himself through the desert. The carriage doesn't even stand on its own wheels but only on some wooden beams that makes the situation far worse.

Why aren't there any people in the desert other than the poor kid ?
The desert ( right side of the painting ) is empty because that is how life is sometimes, especially when you want to succeed at something, you have to invest time in your work, there is not time for having fun.

3) The man in the painting
The man in the painting goes up on some huge white stairs. Going "up on the stairs" is a symbol of human evolution, something that the artist tries to achieve in life. The whole idea of Katabasis is about evolving to a better self. The nails that come out of the stairs and the white spikes under the carriage are symbols of other life hardships along the way.

Now let's analyze the man pulling the carriage, the main character of our story.
He has a beard symbolizing that he has transcended the Katabasis and became a man. He has grown up. The beard also symbolizes "the inner Wild Man" that can be found in each of us and that helps us in dangerous situations. The wild man which Robert Bly talks about in his book "Iron John", the wild man which helps the boy.

Because of the heat in Los Angeles, while riding his bike ( his only vehicle for a period ) the artist's backpack would leave sweat marks on his T-shirt. Even though these sweat marks were frustrating, the artist imagined them transforming into gold, transcending the harsh present situation and looking towards a bright future. These sweat marks are depicted in the painting as the wounds on the body of the man, with skin peeling off his body while revealing the gold underneath.

4) Time
Somebody said "the trouble is you think you have time", but artists always understood they have no time. And that is because they have to work jobs to make a living while finding the time to create art, which does not always translate into money. This issue of time is represented by the big clock on the back head of the man, that is dripping water upwards, and the other small pocket clock. By making the clock drip water upwards, the artist emphasized the problem of time passing so fast and made it more obvious. The water drips going up also help balance the whole painting better, because they fill the upper-left part of the painting ( sky ).

The statues from the left side of the painting, where the man is going, represent the good future and what every person wants in life: a family ( a wife / husband ), friends and other surrounding people.

The statue that is playing a trumpet in the ear of the man is a symbol of my forever invisible friend, the music. And because I always loved musical instruments I really wanted to integrate in my painting such an instrument. I simply adore the beauty and intriguing forms of trumpets, violins and French horns.

5) Final words
What I wanted from this painting is to come up with something unique, an original artwork based on my feelings and my life.
As techniques used for the painting, I worked in several layers of oil paint with a base layer to give the mood of the painting. I mainly used brushes to control the fine details and a few knife strokes here and there.

Even though life is not always easy, and I get inspired from that, what I want to evoke with my paintings is that life is beautiful no matter what hardships we are going through, and that is exactly what will help us. And that there is always hope for a better future. Eventually, finding our way, which is what everybody wants.

As a final word for this painting, I can say our character is represented by a man and Katabasis used to be a ritual for boys, but I think nowadays women also have their own katabasis.

The work fits into the contest topic because it depicts the Katabasis, which is also a battle ( spiritual and physical ) of each person. Our own life battle that transforms us from children to adults, helping us find our way in life.

Alex Sandulescu - creator of the painting

This is the original painting. If this gets sold, probably only 2 more Katabasis paintings will ever be created.

The Sword of the Spirit

God´s armour in times of trouble